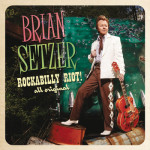 Guitar magician and the famous doyen of the scene rockabilly Brian Setzer was previously known mainly from the groups like Stray Cats or Brian Setzer Orchestra. Recently he toured especially with the project Rockabilly Riot and also released the live album with it. Now he comes with the studio album of  12 original songs that he wrote himself except two songs where is like a co-author signed Mike Himmelstein. Recently Setzer´s copyright works came out rather festively and therefore it is a big event. You can in particular look forward to dynamic rock’n’roll and modern blues that in this administration sounds modern and actual.