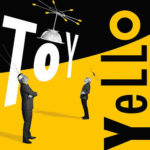 Yellos thirteenth album and first in nine years is a super-smart, electronic smorgasbord of moods and styles from the liquid synths of its lead-off single Limbo to continental torch songs like Dark Side and the shimmering Balearic sunset moods of ‘lue Biscuit. The band was formed by Boris Blank, percussion, backing vocals and Carlos Peron. Dieter Meier vocals, lyrics, a millionaire industrialist and gambler, was brought in when the two founders realised that they needed a singer. The new band name, Yello, was chosen as a pun based on a comment made by Meier, a yelled Hello. Toy is nothing less than the unmistakable sound of Dieter Meier and Boris Blank gleefully working at the top of their game after nearly four decades making music together. Yello: still sounding like the future after all these years.