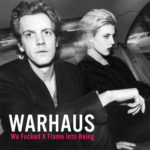 Warhaus is the artistic alter ego and solo recording project of Maarten Devoldere — who (along with Jinte Deprez) fronts the urbanely soulful Belgian rock band Balthazar. Warhaus’ debut album We Fucked A Flame Into Being will be released on September 2nd.

The title of Warhaus’ new album, We Fucked A Flame Into Being (a direct quote from Lady Chatterley’s Lover by DH Lawrence), was “too good to pass on!” declares Devoldere. It is indeed a fitting title for an album where every song celebrates the inscrutability of encounters and pays tribute to the decadence and intensity that life can offer.

Although Maarten Devoldere has up until now kept his Warhaus persona well under the radar, the rare glimpses offered up to this point have conjured up a darkly esoteric lyrical universe, fueled by desire and love, haunted by a hunger for the fleeting, yearning to express the unsayable; We Fucked A Flame Into Being probes such depths savagely.

Illusion and disillusion may subtly interchange, but it is the lie that Warhaus most honors, sowing seeds of despair in an unstable world: “You want magic, count me in / You want Jesus, well I’m not him / You’re an angel or a whore / Tell me who you’re working for / Loving you isn’t easy you know / But it’s a motherfucker not to do so…” (“I’m Not Him”)

“I love contradictions,” asserts Devoldere. “They are musically very appealing to me: raw vs. fundamentally passionate, brutal vs. romantic, art vs. Kitsch, archaic vs. modern”. The French sixties, a touch of exoticism, a careless apathy: Leonard Cohen and Serge Gainsbourg are never far away, as We Fucked A Flame Into Being cleverly coalesces fifty years of music history.

“I’m at the end of my twenties now. With this record I close an important period,” savers Devoldere. “It’s an ode to love, to its excesses and elusiveness. Though love songs are a form of advertising: you portray a woman and the listener should fall in love with her too.”