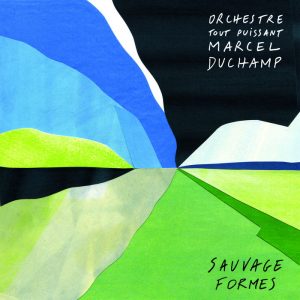 Orchestre Tout Puissant Marcel Duchamp – Sauvage Formes ovember 2016, 10 years of OTPMD. Vincent Bertholet, still resolute, finally realises his old dream of a‘real’ orchestra. And thus was born the project to expand the known horizon. The orchestra became XXL by assembling accomplices from the first hour, who had never really disappeared from view, and an English string section met along the way.

From now on, they will be 14 on stage. An anniversary tour, prestigious stages and makeshift squats, unrestrained agitation as in the first days, and a larger chorus, more percussive than ever.  The multi-headed Hydra gives voice in concert and the frail stages that host it groan under its weight. Nevertheless, it is in the studio that the foundation of a new adventure is forged. Back to England, in the imposing and magnificent building that houses Real World Studios. After Rotorotor (2014), John Parish is again at the controls. 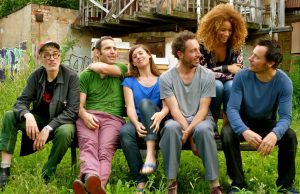 It’s called Sauvage Formes, a shrewd title, because everything here is as geometric as it is organic. The incisive rhythms, doubled in XXL, trademark of the pack, mingle with the unusually melancholy brass. The guitar riffs express themselves in minimalistic cascades, and since the number of strings has tripled, they allowt hemselves the luxury of entwining with each other, like a carnal embrace without epilogue. The voices, more numerous than usual, recite, chant, lead the dance and poeticise, sometimes in French, sometimes in English, and, in the same spirit, the chorus takes the opportunity to shape the pediment of hymns to elsewhere.

Non crossing these 8 songs as beautiful as they are adventurous, it seems to be a story of a voyage, a torn logbook. On the horizon however, neither boat, nor rickety plane, neither map nor compass. Is it because the continent that is mentioned in these texts and melodies is not a known place, but rather a dream world, a land of asylum for rebels and the insubordinate, for the daring and the benevolent?

The fourth Orchestre Tout Puissant Marcel Duchamp album is like a road, a purpose, an ideal of shared and shareable lives. And the writing of this music is like the defences of an imaginary seafront, like an act witnessing an intertwined destiny, an extraordinary adventure. The story of a chamberless orchestra, a sensitive battalion of unlimited generosity, a wild form that never needed a master to tame its imagination and determination.