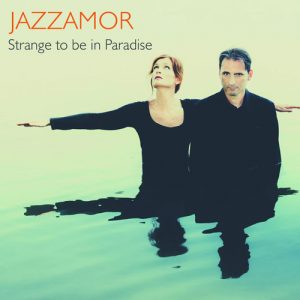 In 2001 Bettina Mischke and Roland Grosch started their project Jazzamor. Influenced by the Bossa-Nova and Latin-Jazz of the 60s they developed their own style with Bettina’s voice making it unmistakeable.

The arrangements are playful yet minimalistic with great care for detail. Electronic sounds blend with double bass and latino percussions. Melancholic piano aires invoke a blue mood with Bettina’s alluring soft voice giving it all a distinct color.

Since the beginning they recorded six albums (see discography) while their style evolved further. In the first years experimenting with sounds was important but they are more conscious again of their jazz roots recently. Arrangements are more concentrated on classic instruments and soloists get more room – but the search for new soundscapes is ever present. With all this both artists never loose the skill for telling playfully nostalgic stories in the typical jazzamor style.

In the beginning Jazzamor was a pure studio project but with their first life concert they began playing all over Europe and in Asia. Maybe the Jazzamor song „Travel…“ was like a mission statement for their music.

Where ever – in a cafe in Brazil, in a bar in Mosque or in a lounge in Singapore – their songs are on a journey around the world.

THE BEGINNING
The love for jazz from the 60s brought together Bettina Mischke and Roland Grosch. For some years they were touring halfway around the world with their jazz quartet. They had their very own idea how to do covers with titles from different genres, for example pop or rap, blending it with Bossa Nova to create a distinct style. The roots for this where Astrud Gilberto, Stan Getz or Sergio Mendes.

THE CURIOSITY
In 2002 the wish arose to do no more covers and to compose their very own songs. The question was how does jazz sounds when updated from the 60’s? How could a Bossa-Nova be like with current production possibilities? With these ideas in mind Bettina and Roland went into the studio and created the first Jazzamor demo-tracks.

THE FLAME
Records were enthusiastic about these recordings and became partner for the first release. On May 11 2002 – at 2:39 p.m. on 8°41’ eastern longitude and 50°01’ northern latitude – Jazzamor was born. An astrologically determined date with effects throughout the next years.

THE RETREAT
Under contract now Bettina and Roland went to the studio for one year to develop their first Jazzamor album. They did not play once in public the whole time. Fourteen songs were composed in an easy going playful manner, relaxed and light like „A Lazy Sunday Afternoon“.

THE START
With the worldwide release of Jazzamor’s debut, the song „Way Back“ was booked for an advertising campaign by Nikon. Thus much faster than anticipated concert offerings came in, especially from eastern Europe. Being at home now in the new Jazzamor
sound-world the second album was recorded in the following year. More songs in a lighthearted electronic Latino sound. Jazzamor’s second is „A Piece Of My Heart“.

THE TRAVELS
Again curiosity for the new led Jazzamor into a journey and search for new inspiration, not just at concerts, but also in the studio. Every song on the next album takes place in a certain part of the world. Sometimes it is the language, at another time it is an instrument, a rhythm or a story, which takes the listener on a trip to a foreign country or a city. This is „Travel …“.
is
HERE AND NOW
”Travel …” was about the experience of being abroad, traveling – not just in a literal sense. Now the fourth release is about farewell and new beginnings after six years of community. Whether it is new production methods, new musicians or changing relationships, many songs on this release reflect these matters. Unlike the previous productions it was a fast paced creation done in just eight weeks. The fascination to work even more with the opposites of electric sounds and live instruments was a big factor in this production. Music for a „Beautiful Day”.

FRAGIL
An interval of three years followed, filled with live concerts and work in the studio for new material. Two dear friends died and two children where born into the families of the musicians. The fragility of life is the theme pervading the new songs. Translucent and clear are the arrangements. Double bass, drums, voice and few other instruments. It’s a „Lucent Touch“.

PARADISE?
Love, hate, the complexities of our times lacking simple solutions resonate in our question: Isn’t it strange to be in Paradise? It is about the uneasy times we live in.