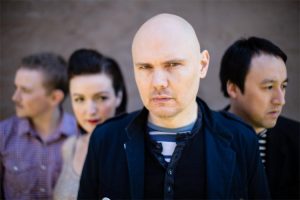 Smashing Pumpkins have unveiled the release of their first new album in almost two decades featuring founding members Billy Corgan, James Iha and Jimmy Chamberlin, along with guitarist Jeff Schroeder. Shiny and Oh So Bright, Vol. 1 / LP: No Past. No Future. No Sun. is due on November 16th via Corgan’s label, Martha’s Music.

Produced by Rick Rubin and recorded at his Shangri La Studios, the album features the previously released single “Solara,” which the reunited group has been performing live during their North American Shiny and Oh So Bright tour that wrapped up last week.

Prior to the album’s release, Smashing Pumpkins will perform in London, UK, at Wembley Stadium on October 16th and in Bologna, Italy at Unipol Arena on October 18th. They return stateside for an intimate hometown show at Aragon Ballroom in Chicago, Illinois on November 30th.