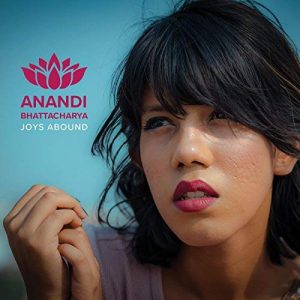 Joys abound introduces the golden voice of Anandi Bhattacharya on a contemporary exploration of her musical roots. With sublime accompaniment by her father Debashish and other leading instrumentalists, Anandi’s outward-looking approach imbues Joys Abound with real musical wisdom which belies her years.

In the words of Anandi Bhattacharya, her debut international album release Joys Abound ‘is about knowing happiness without restraints’. From the opening joyous invocation to Lord Ganesh to the celebration of colours of the various cultures of the world, the album carries a celebratory and positive message throughout, as Anandi’s remarkable voice explores her traditional roots within a modern setting.

Being the daughter of the great Hindustani slide guitarist Pandit Debashish Bhattacharya, Anandi has been surrounded by music since birth and recalls how having ‘breathed in music from every room in the house was a blessing’.A child prodigy in a family of renowned musicians, Anandi’s golden voice was inherited from her grandmother, whose music was nurtured within the family. Anandi started training under her aunt Sutapa Bhattacharya at the age of three and gave her first radio performance at four. Fast forward a dozen or so years and she has toured internationally with her father and uncle and featured on the critically acclaimed fusion album Beyond The Ragasphere. At 22 she is now headlining her own shows, accompanied by her father and uncle, and fellow contemporary vocalist, clarinettist and composer Carola Ortiz from Spain, all of whom feature on the album.

Although steeped in the Indian classical tradition from an early age, Anandi was never encouraged to be a purest by her father and Guru and explains how ‘they never condemned a genre to elucidate the exquisiteness of another’. This philosophy paved the way for Anandi’s deepest regard for fusion, and consequently Joys Abound shows a truly modern approach to tradition deeply influenced by other musical genres. As Anandi puts it ‘the album is light-hearted but carries the true essence of ragas and their moods and evokes a sense of familiarity amidst uncharted waters’. Along with folk songs of Rajasthan and Bengal and a beautiful piece by Nobel laureate poet Rabindranath Tagore, the album includes original compositions by her father Debashish Bhattacharya and Carola Ortiz and features dextrous and sympathetic accompaniment by Anandi’s uncle Subhasis, one of the world’s foremost tabla players.

Along with the towering influence of her father and other legendary Indian musicians such as Ali Akbar Khan, Ravi Shankar and Lata Mangeshkar, Anandi sites influences as diverse as Thom Yorke, Ella Fitzgerald and Joni Mitchell. This outward looking approach coupled with the years of dedication and nurturing of her voice, when she also trained under the renowned Indian female singer Vidushi Shubhra Guha, allows Anandi to explore new musical directions with grounded musical excellence. Listening to Joys Abound one gets a true sense of how her incredible tone and timbre allows her to convey the full gamut of emotions and expressions as it conjures up the flavours of a Rajasthani monsoon in ‘A Pluviophile’s Dance’ and beautifully captures childhood nostalgia in ‘Maya’s Dream’.

For the musical philosophy at the very heart of the album, Anandi is very much indebted to the incredible experience of performing with her father and uncle on the global stage and the exposure this has given her to so many different countries and their music, summed up beautifully by Anandi herself ‘I do not believe that I was meant to imbibe my own culture alone, I think for me, finding my sound with all that I love to hear and all that churns within me is my path forward’. This outward-looking approach imbues Joys Abound with real musical wisdom which belies her years.