You’ll struggle to find a band with a more complex history than The Specials. But almost 40 years after the original lineup released music, they’re back and riding high at the top of the Official Albums Chart with Encore – their first Number 1 record.

The Specials started in Coventry in the late ’70s as a mixed-race collective playing a unique mixture of ska, punk and reggae, often with politically-driven lyrics. Founding members Terry Hall (singer), Lynval Golding (guitarist) and Horace Panter (bassist) are leading the band’s return, plus Jerry Dammers (creator of the 2 Tone record label the Specials were signed to), and singer Neville Staple, guitarist Roddy Radiation and drummer John Bradbury.

Despite bagging two chart-topping singles in the UK in the early ’80s, a Number 1 album eluded them, until now. Encore – their first studio album of original songs since 1998’s Guilty ’til Proved Innocent!, and their first new music with Hall since 1981’s Ghost Town single – sees the band return to their ska/alt-rock roots. The record also includes three covers of older songs: Black Skin Blue Eyed Boys by The Equals, Blam Blam Fever by The Valentines and The Lunatics by Fun Boy Three, Hall and Lynval Golding’s other group formed 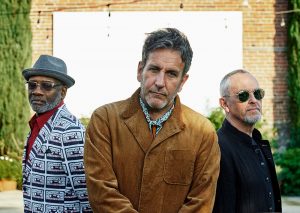 With the group currently promoting across the country, we grabbed a moment with Hall and Golding just as they were about to board a train at Euston station in London. Both were overwhelmed at landing their first Number 1 record, with Hall adding that it felt like “a long time coming”.

“Recording this album was an amazing journey,” Golding added. “We’ve been through so much as a band. But with Terry’s lyrics, we could never go wrong. They fit exactly where we are today. The timing couldn’t have been better.”