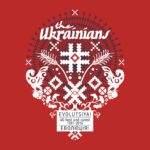 It has been a long journey that has taken us 25 years by trains, planes and battered vans, and wherever we’re going, it feels like we haven’t got there yet – but it has been a fantastic ride!

Our music is borne from the meeting of east and west, Ukrainian and British, and the genetic make-up of the band reflects this. Some members have a Ukrainian background and some don’t. The result is a musical hybrid created from the meeting of different cultures.
We have always felt moved to create our own songs. Because of our ‘musical influences’, Ukrainian folk music and western rock music, it feels natural to record our thoughts and emotions in this ‘hybrid’ style. Of course we also play traditional Ukrainian folk songs, of which there are thousands – composed centuries ago by a people whose culture had often been suppressed and whose only emotional and political outlet was in song. The resulting energy and emotion, combined with the poetry of the Ukrainian language makes it a wonderful listening experience, even for those who do not speak the language. The fact that The Ukrainians have been asked to play festivals all over the world clearly shows that this is the case.
We also occasionally record our own ‘Ukrainianised’ versions of classic western pop or rock songs. They are, after all the folk songs of our age.
Our band’s music can be interpreted as specifically Ukrainian in its musical and lyrical content, but the songs’ themes are most definitely universal because they reflect a whole range of emotions felt by the whole of humanity: love and loss, fear and bravery, ecstasy and despair.
Many labels have been attached to The Ukrainians in an effort to categorize us. ‘Cossack punk’ is one we particularly like, but it doesn’t tell the whole story, as I’m sure you’ll agree when you listen to this collection of our best and rarest tracks. Enjoy!
Len Liggins 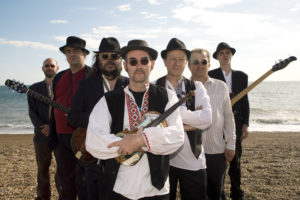 The Ukrainians were founded by ex-Wedding Present guitarist Peter Solowka and his tenor-voiced, fiddle-playing friend Len Liggins in 1991, the year Ukraine regained its independence from the Soviet Union.
‘Oi Divchino’ was the band’s first single, and Len and Peter flew out to Ukraine to make a video for it. Shot in Kiev’s outdoor ‘Museum of National Folk Architecture and Way of Life’, it was the first pop video to be produced entirely in the east for a western group. ‘Oi Divchino’ was an NME Single of the Week and The Ukrainians attracted a lot of coverage in the music and mainstream press.
Their first album, ‘The Ukrainians’, firmly established the group as the world’s major exponent of a new hybrid of traditional Ukrainian folk and British Indie rock music. The band was immediately embraced by rock, punk, folk/roots and world music fans alike, generating a real cross-genre appeal. The Ukrainians were subsequently booked to play festivals and tours throughout much of Europe, including Glastonbury and Womad in the UK.
Word began to spread across the Atlantic, prompting sportswear company NIKE to approach The Ukrainians to record the soundtrack for a TV ad. The music accompanied footage of Ukrainian world champion pole-vaulter, Sergey Bubka and was screened globally.
The group next released their ‘Pisni Iz The Smiths’ EP, which included the group’s Ukrainian language versions of four classic Smiths songs. Voted No.1 ‘Single of the Year’ in Berlin it set the template for the band’s occasional foray into covering classic Western pop songs in Ukrainian style.
The ‘Vorony’ album extended the Ukrainians’ popularity to almost every country in Europe. As a result, the group played a magnificent 110 date tour that took The Ukrainians from Western Spain to eastern Ukraine, covering most of the countries in between. Included were prestigious festivals such as Glastonbury and Womad in Britain and many dozens of World Music, Folk, Indie, Dance and Rock events throughout Western, Central and Eastern Europe. The Ukrainians also toured Ukraine as guests of Ukraine’s Ministry Of Culture. It culminated in a performance in Kyiv’s Independence Square before a crowd of 75,000 people, an internationally-televised event organised to celebrate the anniversary of Ukraine’s independence from the Soviet Union.
The subject matter of the next album, ‘Kultura’ was influenced heavily by the group’s experiences on the latter tour. Kultura turned out to be responsible for extending the group’s popularity to Poland and, via extremely enthusiastic responses from college radio stations and Ukrainian emigre communities, across the Atlantic to the USA and Canada.
The Ukrainians’ fourth studio album, ‘Respublika’ contained mostly traditional songs. It was recorded quickly and captured a post-punk urgency reminiscent of Peter and Len’s early Wedding Present John Peel sessions. It seemed as though the band had turned full circle. ‘Respublika’ generated a huge amount of radio play across central and eastern Europe.
In 2008 The Ukrainians’ music was heard for the first time outside planet Earth when ‘Rospryahaite’ was chosen as the wake-up call on the orbiting International Space Station. Spacewalking astronaut Heidemarie Stefanyshyn-Piper, who famously lost her toolkit in space on the same mission, had specifically requested it.
2009 saw The Ukrainians release ‘Diaspora’, considered by many to be their best and most mature work. Most of the songs deal with the subject of migration: the heartbreak of leaving family and homeland forever coupled with the excitement of starting a new life. The album had a strong resonance at a time when waves of young Ukrainians, Poles and other eastern Europeans had been emigrating to the West in the hope of finding work.
In 2014 The Ukrainians released their first vinyl album since 1991. Called ‘Never Mind The Cossacks’ (Zirka Records ZRKLP7), it was an official Record Store Day release and features studio, live and acoustic versions of classic Sex Pistols songs including Anarchy in the UK, God Save The Queen, Pretty Vacant, Problems and Holidays in the Sun. It sold out in one day.
For Record Store Day 2015, The Ukrainians surprised their fans with a vinyl album ‘A Short History of Rock Music In Ukrainian’, comprising their ‘Ukrainianised’ versions of classic rock and pop tracks. This was followed in May 2015 by an expanded 16 track CD version entitled ‘A History of Rock Music In Ukrainian’.
2016 marks The Ukrainians’ 25th anniversary, and to celebrate this Berlin label Eastblok Music has brought together some of the band’s best and rarest tracks. CD 1 features well-known singles and great album tracks, while CD 2 contains a selection of live, rare and previously unreleased tracks – including many surprises! So pour yourself a large cool vodka, turn the volume up to maximum, and enjoy!