Following 2015’s excellent, if a bit too lengthy, Born Under Saturn, U.K. art-pop architects Django Django turn in a more focused though still exploratory effort with their third album, Marble Skies. Landing immediately on a signature sound can be a blessing and a curse and with their first two records, the London-based quartet have firmly established their distinctive amalgam of metered Krautrock, rockabilly guitar grooves, and richly melodic electro-pop with psychedelic flourishes. Of course, jam-packed within each song are the hundreds of other eclectic influences and offbeat details that make Django Django such a unique act, but in the context of a full-length album, they’ve set up expectations of what listeners are likely to get. Without dramatically breaking form, Marble Skies manages to forge a handful of new paths, while also dialing in on some of the home-built charm that made their Mercury Prize-nominated debut so arresting. While catchy lead single, “Tic Tac Toe,” could have slotted in beautifully on that first record, mid-album standout 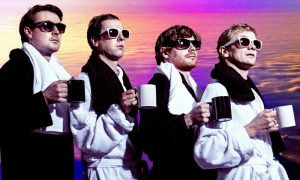 “Sundials” is a lush, clarinet-adorned piano pop gem that sounds unlike anything else in their catalog.

A pair of outside collaborators in Slow Club’s Rebecca Taylor (aka Self Esteem) and Metronomy drummer Anna Prior also add new colors to the group’s paint box with the former taking over lead vocals on the plucky electro-R&B of “Surface to Air.” Produced by drummer David McLean, much of Marble Skies — which, unlike its predecessor was self-recorded in their own cozy digs — has a greater emphasis on sprightly new wave synths and piano, melding bright plastic artifice with nutty human zeal in a way that is undeniably fun. Even on “Further,” a nimbly chugging rocker in signature-Django mode, the band still seems to tap into an infectious creative energy, coming off like a four-headed Trevor Horn churning out crafty classics for the 21st century. More nuanced than previous releases but recognizably brand-related, Marble Skies is another win for Django Django.