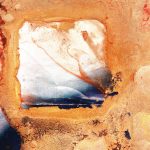 Isaac Delusion is a french indie band and Rust & Gold is their second album.

According to music medias, this album moves away from the dream pop vibe of their first album to get closer with rough and rocky guitar riffs and distorted electronic piano layers, keeping only the very unique voice of their singer the same high and beautiful tone. The band keep singing in english on each track. Only the song Cajun is written in french.

Video clip of first extract ‘Isabella’ has been released. It mocks our sexualized and body image feeded society.

The album is now available on every legal streaming platform and music market place.