BOOGÁT is a Latin American vocalist who constantly reinvents himself with his prolific discography and a unique artistic approach. Boogat has earned international recognition on the Worldbeat / Tropical Bass circuit, mainly in North America where tours and festival appearances have increased significantly since 2013.

Boogat’s new album, San Cristobal Baile Inn, is a brilliant personal exploration of the multiplicity of identity. As Boogat explores his own multiplicity (and the idea of home and belonging) he reveals truths we can all contemplate — while dancing.

Being a second-generation Canadian, Boogat had always dreamed of living in Mexico — his mother’s homeland — at some point in his life. So last year he moved to the country for a year, exploring his roots and travelling in Europe and the Americas for gigs. It’s also where he wrote San Cirstobal Baile Inn: San Cristobal being the patron saint of travellers; “baile” 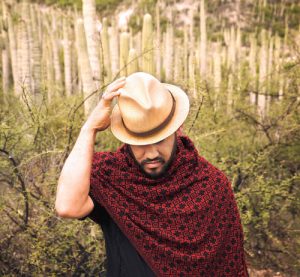 While exploring the personal, Boogat reveals various themes and truths that range from universal to Canadian to Latino to Mexican. For this album, he decided to only write songs about things that make him happy. With that, you’d think that any political messages might be the buried; but wrapped in subtlety and humour, San Cristobal Baile Inn makes richly nuanced statements.

In the song “Aqui,” Boogat sings about the good vibes in Latin America, rapping a list of legendary people and places, ranging from Borges to Mercedes Sosa to Machu Picchu. Through call and response, Boogat lists the “good things” that Latin America has, responding with the exclamation “chingon!” (Mexican slang for “f–king cool”), whereas the “negative aspects” of Latin culture receive a “no hables de eso” response (“don’t talk about it”).

The song captures the duality of life in Mexico. Boogat elaborated in his First Play Live interview with CBC Music, saying that Mexico is a beautiful place but, at the same time, you have to look out the window before leaving the house; look behind you when you get on the metro; put your wallet in your front pocket; adjust your backpack; check your back again while getting out of the metro; make sure the kids are home by sundown.

The Montreal-based artist said he loves his Latin heritage, but after a year in Mexico, he has chosen the safety of Canada. “I’m not crazy,” he said.