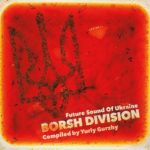 Yuriy Gurzhy is the bandleader and vocalist of the band RotFront, as well as DJ and compiler of legendary CDs including “Russendisko Hits”, “Russensoul”, “Shtetl Superstars” and “Revolution Disco”. His next step is selecting the beats of his homeland for “Borsh Division – Future Sound of Ukraine”, as well as starting a new project, Born in UA. Beet soup – borsh, borscht or borschtsch… for a CD title? Absolutely, says Yuriy, because this soup is a symbol of Ukraine. Not only Ukrainians love borsh: the title of this record could also be interpreted as “Borsh: Many Nations, One Soup”. As Gurzhy puts it: “In these hard times we Ukrainians need to concentrate on the things that still unite us, that’s my concept.” Yuriy and his family moved to Berlin from Ukraine in 1995. Four years later, he started to spin Eastern-European music in Berlin clubs together with his friend, Wladimir Kaminer, a writer from Moscow. Slowly but surely the sweaty, vodka-fueled parties at Kaffee Burger with their wild mix of punk, soul, klezmer and polka got bigger and bigger, as did the DJs behind it. “We would drop stuff from Russia, Moldova or Belorussia, and a lot of Ukrainian bands, as well, of course, – says Yuriy, – back then no one would feel any difference, it was very relaxed, no antagonism whatsoever.” However, two years ago, after hearing the news from Maidan relayed by his friends standing there for days and days in the cold, seeing TV reports about people fighting and dying for the freedom and independence of Ukraine, Yuriy decided to change his focus. It was not only a conscious attempt to get back to his roots; he also wanted to document how his homeland sounded today. As his partner Wladimir Kaminer says in his introduction to this CD, “This is the music produced in the new Ukraine, with its brand new soundscapes. Here comes the Sound of the Ukrainian Revolution – the new Sound of Europe.”