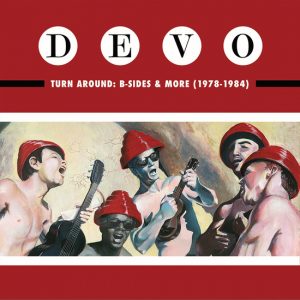 One of new wave’s most innovative and (for a time) successful bands, Devo was also perhaps one of its most misunderstood. Formed in 1972 by Kent State art students Jerry Casale and Mark Mothersbaugh, Devo took its name from their concept of “de-evolution” — the idea that instead of evolving, mankind has actually regressed, as evidenced by the dysfunction and herd mentality of American society.

Their music echoed this view of society as rigid, repressive, and mechanical, with appropriate touches — jerky, robotic rhythms; an obsession with technology and electronics (the group was among the first non-prog rock bands to make the synthesizer a core element); often atonal melodies and chord progressions — all of which were filtered through the perspectives of geeky misfits.