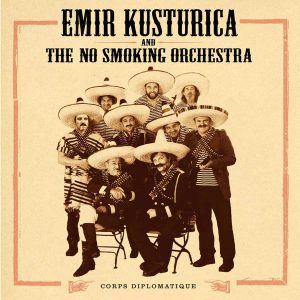 No Smoking was a punk-infused band established in Sarajevo, in 1980, under the Serbo-Croatian moniker “Zabranjeno Pusenje.” Lead singer and songwriter Dr. Nelle Karajlic was a bit of a thorn in the side of the post-Tito government in Yugoslavia. The band’s debut album, Das ist Walter (1984), sold surprisingly well, and spawned the hit “Zenica Blues,” which boasted sales of 100,000. But the ruling forces weren’t about to let Zabranjeno Pusenje repeat that success, hence a crackdown prevented widespread album sales and concerts appearances from taking place. Their follow-up, Dok Cekas Sabah sa Sejtanom (1985), fell victim to hard-line censorship and nearly ruined the band. At that time, filmmaker and punker Emir Kusturica joined the band as their bass player. Lured by the radical persona the band had acquired, he remained with them long enough to record “Pozdrav iz Zemlje Safari,” which was released in 1987 and sold considerably well. Kusturica left No Smoking soon after having signed a contract for his film Time of the Gypsies. A rejuvenated No Smoking released Male Price o Velikoj Ljubavi in 1989, a cultural and political piece of work that, perhaps due to the war and unstable government, was no longer the focus of 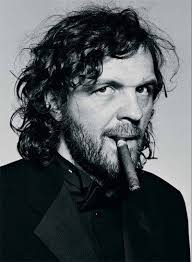 Yugoslavia’s powers that be.

Once again Dr. Nelle Karajlic felt the need to restructure the band. In 1994, he built the group around younger musicians, including Kusturica’s son Stribor Kusturica on drums. The younger Kusturica had a penchant for reggae, and the other members’ preferences ranged from gypsy to jazz to Balkan folk, and even Andean music. Thus Karajlic’s vision of becoming an “international” band was beginning to materialize. This new infusion of young talent and influences yielded 1997’s Ja Nisam Odavle, which was dedicated to all the victims of the war. Benefiting from his ties to the band, Emir Kusturica sought No Smoking when needing music to accompany his 1998 film Black Cat White Cat (“Chat Noir, Chat Blanc” in French, and “Crna Macka, Beli Macor” in Croatian). That soundtrack album Chat Noir, Chat Blanc was a whimsical and melodramatic score reflective of the film itself. That collaboration was also the impetus behind Emir Kusturica re-joining the band, this time as guitarist. In 2000, the newly titled Emir Kusturica & the No Smoking Orchestra released Unza Unza Time. “Unza” refers to the unique amalgamation of sounds comprising their repertoire. 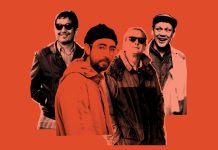 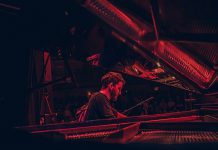