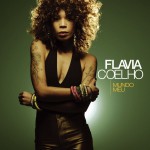 Brazilian music found a new home Europe, as evidence we can mention a native of Rio de Janeiro Flavia Coelho. From the debut album Bossa Muffin from three years ago, he had more than 200 concerts and their small audience gained in France mostly, where they operate for several years. Just before the football championship second album was released under a name Meu Mundo. During a recording assisted Patrice who is German reggae star, stunning drummer Tony Allen, accordionist Fixi or rapper Speech from Arrested Development. Debut album brings in total 12 songs, which are manifested musical roots of the protagonist, while some texts point to a variety pitfalls of contemporary society.