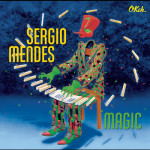 Only few artists lasted in the music sector for over 50 years. But Sergio Mendes is one which did it. His career is marked by particular styles as bossa nova, samba and jazz and film music. Recently, for example, did the music for both parts of the animated film Rio. His last released album is called Magic and songs in it are spiced up by several world stars. For example people such as Brazilian star Carlinhos Brown’s drummer, Johnny Legend or Will I Am of the Black Eyed Peas, which is indicating that some of the hit songs have gained considerable potential.