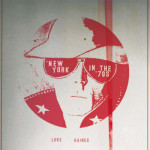 Luke Haines is an experienced english songwriter and singer know from projects such as The Auteurs or Black Box Recorder. Since 2001 he is realeasing albums under his own name, which the last one is inspirided by 70’s New York music scene and somehow it’s linking to last year title Rock and Roll Animals. You can feel nostalgy of last album in every song. Singers that are mentioned such as Alan Vega from Suicide, Merilyn Monrou or Elvis Presley in Hains own way that is full of playfulness and humor.