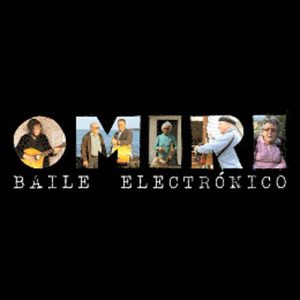 Omiri, one of the many projects of the producer, composer and multi instrumentalist Vasco Ribeiro Casais is back with a new record “Baile Electrónico”.

After 7 years without a record, in “Baile Electrónico” Omiri presents itself with a mature project improved from years of live shows with a strong audiovisual component. “Baile Electrónico” will be released in all digital platforms on the 21st April and it’s physical release will be in June, distributed to the world by Galileo.

“Baile Electrónico” it’s Vasco’s version of what could be a tradicional folk ball brought to nowadays, it could be danced in any small village party or in the big city trend club. The album also gathers two guest appearances: “País Colmeia”, 1st single of the album, features Capicua, the female rapper from Porto and the track “Fado em Picadinho” features the known folk singer and accordeonist Celina da Piedade. Besides the instruments used previously such as the Nyckelharpa, Portuguese Bagpipes and Bouzouki, in this work Vasco Ribeiro Casais also adds more traditional portuguese instruments as the Cavaquinho and Viola Braguesa. All the electronics are made thru the manipulation of field recordings made mostly by Tiago Pereira which confer a more vivid and organic sound to the album. Besides the use of samples and turning them into rhythmic textures, whole melodic phrases sung by icons of the Portuguese oral tradition (Adélia Garcia, Tia Adorinha, Margarida Fidalgo Magalhães, among many others) are also used. Vasco Ribeiro Casais has been leading acts such as Seiva, Sopro, Dazkarieh and Omiri. He has been working as a musician, studio producer and composer/songwriter for/with Uxu Kalhus, Né Ladeiras, Carlos Mendes, Celina da Piedade, Filipa Pais, Kepa Junkera, O Báu, Velha Gaiteira, Tiago Torres da Silva, Nação Vira Lata, Toc’andar, Rui Junior, Voodoo Marmelade, Fado Morse, Orquestra de Foles, A Mariposa, Fogo do Ar, Alma Menor, João da Ilha, Xoto. He recently recorded, mixed and masterized the song “Primavera” from Celina da Piedade which got the 3rd place on the Portuguese Selection for the Eurovision Song Contest 2017.

About OMIRI:
“For some years now, Vasco Ribeiro Casais has built a well-earned reputation for being one of the most original and exciting musicians to pick up on the Portuguese traditional rhythms and smash them against other European folk forms alongside is sober use of electronics. His project OMIRI remains a facisnating demonstration on how to do this.(…)” in Songlines (UK)