Shedding the skin. A fresh beginning. That’s what singer Lina and producer/multi-instrumentalist Raül Refree have given Portuguese fado on Lina_Raül Refree. They’ve sloughed off the old trappings and exacting traditions of the country’s national music and given it into a perfect fit for the 21st century. Gone are the chiming guitars that were the music’s instrumental trademark and in their place comes piano and analogue synths. Together, they’ve reinvented the music that holds a nation’s soul, and done it while keeping the rich beauty of the melodies and the aching poetry of the words that are such a vital part of the tradition.

“I wanted to do something different with fado,” Lina explains. She already had a deep background in the music; her family has sung it for two generations and she took it up when she was 15, studied opera and turned to the stage, where she portrayed fado’s great queen, Amália Rodrigues, before being invited to become a regular at Lisbon’s iconic Clube de Fado. She’d amassed an enviable pedigree. But it was time for more. And she knew exactly who to call.

“I invited Raül to produce my album.”

Raül Refree has been widely-praised for his solo work, like the album La Otra Mitad, as well as his ground-breaking productions; he’d collaborated with the flamenco incendiary Rosalía on her Los Angeles album, the disc that first made her name.

“Lina thought that fado needed something similar to what I did with flamenco,” he recalls. “She invited me to hear her sing at the club. The very next day we went to the studio to see if we could develop a good musical relationship. She began to sing and I played.’

Refree began with guitar, but quickly realised that “I felt more comfortable with the piano,” and with that change the mood for the record was set.

“Everything happened very naturally,” Lina continues. “We wanted to make something that wasn’t the same, a record that broke the rules. In the end we made something we both really enjoyed, and that’s important.”

Lina chose the songs, fado classics associated with Amália Rodrigues. It was material she knew and loved deeply.

“I can’t sing something I can’t feel,” she says. “That’s my rule. We didn’t change any of the words or the melodies in the songs. There are no traditional instruments, but the emotion and feeling of each piece is absolute fado.”

Not being a part of the tradition, Refree was unfamiliar with the originals. That helped him and allowed him to come to the music without the weight of history.

“I didn’t want to know them,” he says. “I wanted to see how I reacted to the melodies. Because it was only me playing, sometimes I had to change what I came up with to work with the tune.”

“Raül had a piano and some synths, a lot of instruments unlike anything you normally hear in fado,” Lina says. “As soon as we started working together, things happened. I felt free when I began to sing with him.”

Beginning in May 2018, over the course of three sessions they let the sound take shape. In the world they created, the music embraces and captures the listener via the time-honored songs, the minimalist textures and Lina’s performances – so full of bittersweet hope. Yet there are also some delicious, unexpected moments that add to the majesty, like Lina, multi-tracked, rising out of the mix like a choir on “Barco Negro,” or the fragile, quivering of piano notes that take wing on “Gaivota.”

Throughout, Refree’s arrangements are quietly subtle, the analogue synths and ambience very sparingly used to keep the voice very much at the heart of everything.

It’s a perfect balance; the instruments are a frame for Lina as she explores every nuance of sorrow and fleeting joy, feeling every word she sings at the core of her being. Refree deftly gives her the space and the freedom to shine.

“This is quite a naked record,” he agrees. ‘I tried to keep Lina’s energy. When I work with such a good voice, I want to reinforce it, not smother it. I wasn’t trying to think about history in the studio. I was focusing on the present moment. I tried to play what I liked. It worked.”

“The record is different,” Lina notes. “That was all we wanted to do. We’ve updated fado. But we only tried to make music that moves people.”

The album does carry on big surprise. It arrives in the final two minutes of the disc, though, when a simple acoustic guitar falls in behind Lina on the track “Voz Amália De Nós.” It’s the one song on the album that the queen never sang.

“It was written and recorded by an 80s musician, António Variações,’ Refree said. ‘We both liked the song, but he’d done all the music on synths, so we decided to do the opposite.”

After the mood of the previous tracks it arrives like a rush of water, a reminder of the lush, enveloping world of modern fado that Lina and Raül Refree have created on Lina_Raül Refree.
It’s a disc that’s morphed the music, but it’s altered the people who made it, too.

“I didn’t know much fado before this,” Refree notes. ‘Now I feel it’s part of my life. Now I listen to Amália and I understand it more.”

“Over time, fado developed a lot of rules,” Lina observes. “We’ve broken many of those. But we haven’t forgotten the roots of the music.”

What they’ve achieved is to free the music from the shackles of its own, long history. Lina_Raül Refree is fado for today, a sound that goes beyond geography. It sheds the old skin for the new yet still leaves it as Portugal’s soul, it’s great, beautiful cry of emotion. 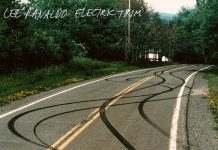