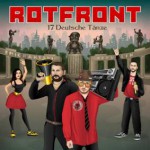 Rotfront is not an ordinary band. It will probably be clear to anyone who listens to their latest album “17 German Dances”. Their style? Puzzler. Once the listener will want to say that it’s something like Neue Deutsche Welle used to be, he will stop, and says that it’s more of a Balkan brass band, then again, it’s more like twisted ska, and then … again, there will be no ending to it. So, what is it? It has no official name. Firstly it’s world music. But what kind? German? Balkan? English? Or so? It’s crazy freestyle – shoreless, parody, ironic. Basically it’s no novelty, bands that play similar music, are on the world music scene for over 20 years, they just never been properly reflected by our media. Rotfront remind our fellow citizens about … Senzus! But beware! Senzus played spontaneously without original artistic contribution, and there, in the music of Rotfront, breaks cheesy impression credible continuity with the tradition of burlesque, cabaret, military marching Mars, Munich and Russian disco, Hitler hated Jewish klezmers. In short, total multicultural fusion. Finally, since the fall of the Iron Curtain, Western Europe rushing wave of multicultural art, which reflect the feelings and opinions of emigrants, or “to” emigrants. The first album of Rotfront it expresses even in name and it’s called “emigrant Raggamuffin” (2009). But their latest album, it overcomes the diversity for miles – rap, hip-hop, disco, ska, reggae, dancehall, Balkan brass band, klezmer, cumbia, polka, traditional German smash hit, alternative pop and rock – intentionally degraded entertainer contain and la Ein Kessel Buntes, punk, heavy metal … still missing something? Never mind, next time. Finally, the membership base of Rotfront is also multicultural; they are not Germans, but Yuri Gurzhy Ukrainian, Russian writer Wladimir Kaminer of Jewish origin and Hungarian Simon Wahorn. Other members are changing; sometimes there are fifteen of them. Does it have any meanings to unravels the tangled skein of styles in English, German, French, Russian? Would not it be better to let them tear down the dance, what is essentially determined? After all, on the worlds festivals have bands like Rotfront great response in the audience. The earth trembles there’s cheering, dancing, stomping, jumping; strange that tents do not fall. Their music will understand German, Russian and Slovak. (Although for some Slovaks it takes longer). It is melodic and catchy dance communicative trumps everything for the world and for all generations. Rotfront try it? We begin with the song “Everyone Says Russian?” Or by “contraband?” By the way, is not there the “supposedly” classical music in recent years too much? And, cheerful, crazy, too little? More precisely said- a jolly good. For example, you can joke about James Bond as did Piešťanské Slniečko(Slovak band)? Or The Robots by Kraftwerk converted to klezmer-rap? Or make fun from the promotion of cool lifestyles , nineties years?