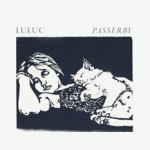 To follow in the footsteps of Nick Drake – real suicide. Nick had in fact during his lifetime (1948 – 1974) only so few listeners that they were to be sought under the microscope. Today it is the most widely accepted English folk singer, a real cult. Australian acoustic indie folk duo Luluc confesses Nick’s spirit. Her – Zoe Randell, him – Steve Bloch, have beautiful voices and harmonious vocals. Their touching, melancholic songs are getting under the skin gradually, quietly, that the longer it will last. Who wants to relax with music and to dreamingly relax, he should at least test Luluc.