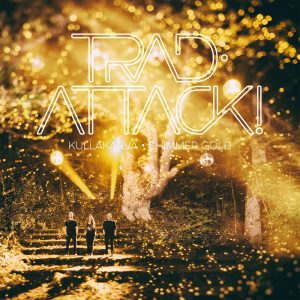 TRAD.ATTACK! invites you on a exciting journey to the mystical Estonian nature, traditions and people where the new and old collide and spark. TRAD.ATTACK! is fresh folk music from Estonia – friendly, passionate, powerful, dynamic, cheerful and true to the roots. Within three years they won 14 Estonian Music Awards and played in 29 countries.

TRAD.ATTACK! are three good friends and well-known Estonian musicians Sandra, Jalmar and Tõnu who have literally turned Estonian folk music on its head.
Since their debut in 2014 TRAD.ATTACK! received 14 Music Awards in Estonia, released EP and full album. They performed in 29 countries and sold out solo concert for more than 7000 people in Estonia. Surrounded by traditional music all her life, Sandra first picked up the Estonian bagpipe when she was thirteen. Jalmar is of the Seto people. Setomaa, a small community in the south of Estonia, has its own a king and distinctive culture, and is particularly well known for its traditional singing. His great grandmother, Anne Vabarna, was one of the most famous Estonian folk singers, so he has grown up in this tradition. Tõnu’s father was the conductor of a brass orchestra, so Tõnu was playing brass before he could walk. He took up classical trombone and drums, and is now one of the most in-demand drummers in
Estonia. Trad.Attack! takes its inspiration from old archive recordings of Estonian traditional songs. Whereas folk music is their starting point but not their boundary: they remain open in ears, mind and soul to different styles and new directions whilst maintaining their emotional roots-heart. Trad.Attack! is fresh folk music – friendly, passionate, powerful, dynamic, cheerful and true to the roots.

LONG BIO
Sandra, Jalmar and Tõnu have long been good friends, and have been active on the Estonian music scene for more than fifteen years. Surrounded by traditional music all her life, Sandra first picked up the Estonian bagpipe when she was thirteen. Jalmar is a Seto: a member of a small ethnic community in southeastern Estonia. Setos have their own king and a distinctive culture, and is particularly well known for its traditional singing. Jalmar’s great grandmother, Anne Vabarna, was one of the most famous folk singers in Estonia, and he has grown up in this tradition too. Tõnu’s father is the conductor of a brass orchestra and he was playing brass before he could walk. He took up classical trombone and drums, and is now one of the most in-demand drummers in Estonia. In 2014 they decided to play together just for fun, to do something different with folk music. At the first rehearsal they decided not to set borders, to keep it fresh and surprisethemselves, with no ambition to perform it in public. It was a great surprise when after the band released their first tune “Kooreke”, it became a hit and people liked this approach to folk music and asked for more. When they applied to play at Tallinn Music Week 2014 they didn’t even have a name; they only had five tunes, but it was just enough for the short showcase. After massive positive feedback from audience and critics they decided to take things more seriously. It seems that the fresh, free approach and friendship between the members creates a special energy which audiences and the musicians themselves very much enjoy.

TRAD.ATTACK! was born!
Trad.Attack! draws inspiration from old archive recordings and from the music of today. Folk music is their starting point but not their boundary: they remain open to different styles and new directions in ears, mind and soul whilst maintaining their emotional roots –heart. The trio elegantly unites its complex-free approach, magnificent sense of the legacy of the past and modern technical solutions into a symbiosis. Trad.Attack! is inspired by the great superstars of their time, the Estonian folk singers and instrumentalist who created and performed music for work, leisure time and festivities. The band brings the archive recordings and this way also the original performers on stage with them. At their first concert the band made a joke about having a master plan to play in every country in the world. Surprisingly this audacious master plan has now been activated – within two years Trad.Attack! has played in 29 countries – Estonia, Latvia, Poland, USA, Germany, Finland, Malaysia, Ukraine, Russia, Kazahstan, Norway, Denmark, Belarus, Italy, Czech Republic, Lithuania, Netherlands, China, South Korea, Malta, Canada, Portugal, Belgium, Brazil, Spain, France, Chile, Sweden, UK. Now there are only 167 countries to go!