Brothers Samir, Wissam and Adnan Joubran have been touring the world with their ouds for the past 15 years, including at the likes of WOMAD in the UK. Through their mesmerizing music, they honour the struggles and oppression of indigenous peoples not only in the Middle East but around the world and especially affirm that their music should be a part of the struggle of the Palestinian people for recognition and liberation.

In Arab origin, the Oud is considered the king of all instruments, and these brothers play the instrument like no other. The Long March, their sixth album, is a landmark for the band and a new landscape in their musical convictions. The album was produced by acclaimed Parisian producer Renaud Letang, who has worked with everyone from Jean-Michel Jarre to Manu Chao to Bjork, at the Studio Ferber in Paris.

Le Trio Joubran teamed up with former Pink Floyd legendary singer and activist Roger Water’s for the track Carry the Earth. The track is dedicated to all those who die for their land but especially to a tragic event when four young cousins were murdered and lost their dreams whilst playing football, as they’d done so many times before, on Gaza Beach. The title of this track is from a poem by the legendary Arabic poet Mahmoud Darwish – “the dead who die to carry the earth after the relics are gone”. 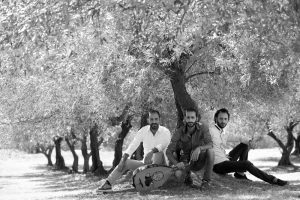 They again collaborated with Darwish for the track Time Must Go By where the poet’s timeless words meet the Trio’s sound in a spellbinding and beautiful union.
Brian Eno who has spent time with the band in the recording studio says “The Trio Joubran talents as musicians are complemented by their compassion as human beings. Their longstanding and determined commitment has made them a symbol of Palestinian identity and resistance. Trio Joubran, in its brilliant and fiery exuberance, sends out a message: Palestine is alive.” 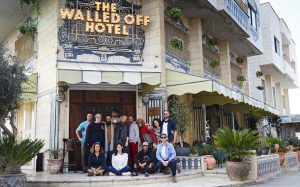 The Trio Joubran, a powerful and mesmerizing live act, have announced European tour dates to coincide with the release of The Long March. They will play at the Barbican in London on 03 February 2019.

Three brothers, three ouds. Samir, Wissam and Adnan. On stage and in the studio, their instruments come together like three soloists who form one single voice. The oud, or Arabic lute, has become the voice of their souls, the beating heart of their existence with which they have become one. Always three, together.

In their compositions, each one contributes without ever overshadowing the other two. For them, music only has meaning as a trio.  With Le Trio Joubran, virtuosity does not give into demonstration. For these natives of Nazareth who come from a long line of luthiers, it is about the perpetuation of a tradition. A tradition they have also deeply renewed by their innovation on the oud, this solo instrument which they have so wonderfully united as an ensemble.

Since 2002, their reputation has continued to grow: from the Olympia in Paris to Carnegie Hall in New York to the United Nations, they have played to sold-out crowds. Accompanied on stage by compatriot and percussionist Youssef Hbeisch, their compositions leave room for their exceptional improvisational talent, and all it takes is just a glance toward the other two for their three voices to quickly become one.

Le Trio Joubran also celebrate their country by setting the words of celebrated poet Mahmoud Darwich to music (À l’Ombre des mots/In the Shadow of Words). Because this is as much about music as it is about Palestine. Listening to the Trio Joubran is plunging into the soul of a people. Egypt had Oum Kalthoum. Lebanon has Fayrouz. Palestine now has Le Trio Joubran.