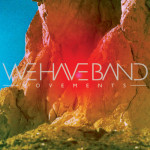 WHB is a dance-rock trio from Manchester operating on the scene for over five years. They have several successful remixes for big-name performers and, recently, they released third album which is musically most mature. All of the ideas create a movement full of urgency and also nostalgia, because this music creates images of idea, how certain bands from golden period of Manchester scene might sound, if they would evolve until nowadays. It doesn’t matter that sometimes they sound like New Order, Happy Mondays, Stone Roses, because in the end they sound timeless and fresh with the ambition to reach at least two generations.