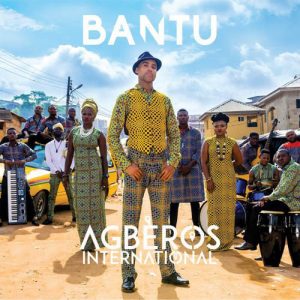 The sound of BANTU is the sound of Lagos. The city, at once a source of inspiration and some exasperation, is not easily classified. The band, eclectic and varied, has both activist and fun inclinations. Its listeners and fans, as seen at the Afropolitan Vibes concert, comprises various nationalities. As the band itself was birthed away from Nigeria and then consolidated on the motherland, this blend of nationalities and sound seems fitting.

Though now a 13-man band, BANTU began as a group of four young men then living in Germany. Ade Bantu, Abiodun, Amaechi and Patrice. The name BANTU comes from the middle name of the late, great Steve Biko; it is also an acronym: Brotherhood Alliance Navigating Towards Unity. In 1996, the band released its first song ‘No Vernacular (Humber Version)’. An album, Fufu, followed, two of its singles ‘Nzogbu’ and ‘Fire Inna Dancehall’ becoming hits in Nigeria, home country of three of the group’s members.

To produce the songs on Bantu, the band secured the services of musicians from Senegal and Jamaica including Earl ‘Chinna’ Smith, guitarist for reggae great Peter Tosh. This element of collaboration informs the band’s ethos: where much of today’s music and art is centred on the individual, BANTU has fostered community, even among its fans. BANTU has worked with UB40 and Gentleman on the song ‘Rudie’. It has promoted and nurtured several acts including Ayo, Mariama and former band member Patrice. BANTU has worked in the frontlines of musical movements in two continents, Afropolitan Vibes in Nigeria and Brothers Keepers in Germany, all the while providing listeners with an eclectic fusion of Afrobeat, Highlife, Hiphop and Afrofunk genres.

All of these artists are now associated with the band, so that when in the first few seconds of the new album, Agberos International, Ade Bantu declares “It’s time to connect to the BANTU vibe,” he is speaking to whoever is listening and to a vast number of BANTU collaborators around the world, all of whom have become part of the extended BANTU family. Some of the members of this family include Highlife legend Fatai Rolling Dollar, Juju Music maestro Ebenezer Obey, Fuji Music artist Adewale Ayuba, MOBO Award winning singer/songwriter Nneka, Afrobeat co-creator Tony Allen, and one of the most successful artists of all time Harry Belafonte who covered their song ‘Don’t Give Up’ for the 2012 biopic ‘Sing Your Song’. BANTU has collaborated with well over 40 national and international acts.

Besides these artists, BANTU implicates you in its web of family. On the Afrobeat song from Agbero International, ‘Niger Delta Blues,’ there is as much a call to international authorities to look at the plight of the people of the Niger Delta as there is to the people to dance as there is to master drummer Tony Allen, whose universally African spirit one might say governs the proceedings on Agberos International. As Allen once said, “You can tell a good drummer because we have four limbs and they are playing different things. The patterns don’t just come from Yoruba [but] other parts of Nigeria and Africa.” Musically, Agberos International represents a quest for liberation. “We wanted to set the record straight and break free from all the labels people keep trying to apply when wanting to describe us or our music,” said Ade Bantu.

The title of the album Agbero International expresses the band’s intentions. Agbero is Yoruba slang for public vehicle conductor, a man hailing passersby to board his taxi or bus. The agbero implicated in the title is a crowd-puller of international reach, an apt metaphor for a band like BANTU, which deploys the estimable services of producer/sound engineer Aman Junaid who has worked with such artists and groups like TLC, George Clinton, Joi and Organized Noize on the new album.

On the aforementioned track ‘Niger Delta Blues’, the album’s longest song, Ade Bantu, who is fluent in both English and German, offers a spoken word piece, parts of it in the pidgin peculiar to the Niger Delta region of Nigeria. The song is introduced by a Yoruba folk song in what can be read as the band focusing its pan-African, pan-Nigerian focus on a single song. “The blues of the Niger Delta has now become the blues of Nigeria – yours and mine,” says Ade Bantu over a heavy afrobeat sound.

Not that the music of BANTU is exclusively political. Along with stinging criticism of the Nigerian ruling class and harmful western policies, the music of BANTU is never less than danceable -as if even in acknowledging the difficulty of Lagos, Nigeria and African living, there is an imperative to be happy, to see the bright side, to remember that though music is a tool of protest, it also one that inspires dance. On Agberos International, the band offers a satire of the Lagos Barbie archetype, a local human version of the popular doll; there is ‘Ma Ko Ba Mi’, a playful interpretation of a common Yoruba folk song; and ‘Oni T’emi’, a love song delivered in spoken word verses featuring the poet Wana Wana aka Wana Udobang, who plays a female who is serenading and is being serenaded by Ade Bantu’s male lover with “pitch-perfect oriki poetry”. The album concludes with ‘Ile (Africa)’, a part eulogistic, part elegiac tribute from a returnee narrator to the continent that inspires the band. It is both love song and activist music; as always it lends itself to dancing.

As with the album, a multifarious spirit governs the monthly Afropolitan Vibes concert in Lagos, which has become the band’s most visible representation. There BANTU acts as host band providing backup for a vast array of artists, numbering well over a hundred and fifty local and international acts. In the time since the first edition of the concert, its audience, a large percentage of which are regulars, are less attendees than family. They are reminded of the nature of their country; they are also encouraged to dance. The varied nature of the message passed from the stage reflects among the attendees-some of which are lifetime Lagosians, occasional Lagosians, visitors to the city, and expatriates. For one night, the many parts of Lagos come to party at the artist enclave known as Freedom Park, which, many years ago, housed prisoners. Months before the release of Agberos International, BANTU travelled by road, more than 5000 kilometres across the continent, to attend a festival at the banks of the River Niger. “We were determined to show solidarity with our fellow brothers and sisters in Mali who have been battling with Islamist insurgency for years,” said Ade Bantu about the trip. Here then is a band that puts its feet where its music is.