Kkisméttin is the first solo album of Antonis Antoniou, founder and driving force behind the award-winning bands Monsieur Doumani and Trio Tekke.

In his native Greek-Cypriot tongue, Antoniou blends together soundscapes and textures he has accumulated during the course of his adventurous musical journey: from classical music to jazz, rock, traditional, experimental and sound art.

The Middle Eastern melodies of the lute (one of Cyprus’s main traditional instruments) resonate with analogue synthesizer glides and edgy guitar riffs, pushing the boundaries and forming a distinct contemporary musical mosaic.

The barrels lining the divided city of Nicosia across its buffer zone literally become musical instruments, providing the album’s rhythmic bedrock and creating a rusty/grimy quality.

The word is used by both Greek Cypriots and Turkish Cypriots (kismet), the two largest communities inhabiting the island of Cyprus. This deeply political album attempts to craft a portrait of the divided capital, Nicosia.

The island’s turbulent history has seen many dark pages. One of them is the current division and the continuous political clashes between the two communities. For those who believe in peace and struggle for reunification, this painful situation cannot be accepted as the island’s destiny.

The course of kkisméttin can be altered by the people of Cyprus and brought to a fresh start with new foundations. The re-written kkisméttin will be filled with laughter rather than pain, with hugs rather than hostility, with bridges and open thoroughfares rather than checkpoints and walls.

The album was created during the unprecedented lockdown enforced in Cyprus as a measure against the spread of Covid-19.

During the initial period of confinement that lasted two months, many people felt suffocated behind closed doors. For some, including Antoniou, the enforced confinement also served as a reminder of the limitations to their freedom of movement and to other fundamental freedoms that have long existed in their divided country. There, and in particular in Nicosia, where Antoniou lives, streets have been forcibly cut into two by rows of concrete-filled barrels, placed there by the ghosts of the past.

These barrels represent political agendas, but they also reflect the effects of blind nationalism, which does not allow Cypriots to enjoy the beauty of their island. Viewed on a more symbolic level, these rows of barrels could be seen as material expressions of alienation between people, chasms and corruption in society.

In Kkisméttin, the rusty barrels literally get turned into musical instruments that vibrate, establishing the rhythmic layout and sound texture of the album. The barrels of Cyprus’s division are kicked playfully; the sad and tragic stories they hide are exposed and then drift away. The barrels roll to faraway fields and a fresh breeze brings celebrations, hugs and kisses. Thus, kkisméttin – the island’s fate – is rewritten with new terms of reference. 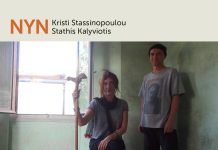