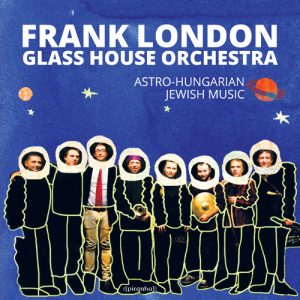 It started as a tribute to Jewish Hungarian heritage. Where it will end – nobody knows. Right now it’s a wild ride back and forth through time – deeply rooted in the folk tradition, crossing genre borders unrestrained, pedal-to-the-metal and rocketing forward. Thrill, adventure, zest – Frank London’s Glass House Orchestra is what music is all about.

“Astro-Hungarian folk punk” is how Grammy winner and Glass House bandleader Frank London from New York City approximates what the group’s celebration of the Jewish Hungarian folk tradition has rapidly grown into: standing on the shoulders of Eastern European folk, wild and free as the punk revolt, reaching for the stars! The Glass House Orchestra is a supergroup of eight acclaimed musicians with various backgrounds in four different countries and two continents. They’re well aware of history, yet totally here and now. They throw together whatever they have – there is no end.

The project was originally conceived as an assignment to commemorate the victims of the holocaust in Hungary, 70 years after the end of WWII. Then, drawing on the sweeping wealth of their combined backgrounds, Frank London and his seductive seven expanded their initial scope of the Eastern European past into an all-around view in all kinds of directions – from archaeologico-conservationist to contemporary post-modernist and on to deconstructivist. The project’s name is taken from the Glass House or Üvegház, designated by Swiss diplomat Carl Lutz during the Holocaust in Hungary to shelter and save the lives of thousands of persecuted Jewish Hungarians. It was one of 76 similar safehouses across Budapest.

With each member a world class virtuoso in their respective fields and beyond, the musical map of the Glass House Orchestra reaches from Hungarian, Carpathian, and Roma/Gypsy folk to new klezmer, classical both East and West, European as well as American jazz, new music to experimental avant garde. It combines religious to secular, distinctly rural to unmistakably urban. It might take you on the legendary high speed roller coaster rides of the Hungarian cimbalom tradition one moment, then hijack you into funky jazz grooves or moody new music soundscapes the next.

What if the Jewish Hungarian folk tradition had been able to live on unhindered? What would it sound like today? What about tomorrow? Those are the questions reverberating in the background and with an open view into the Glass House Orchestra’s horizons.