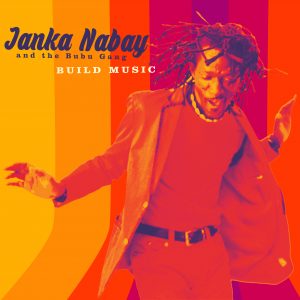 At a mixing session in Bushwick, Brooklyn, Janka Nabay, the famed modernizer of indigenous Sierra Leonean Bubu music, proclaims: “Everywhere is sorrow, tears, blood and happiness. At the same time.” Nabay is not your typical purveyor of “global grooves” where cultures easily mix in a melting pot of electronic beats. For Nabay, the world is a strange and contradictory place. Violence and joy, the modern and the traditional, inexplicably coexist in our cosmopolitan world. These paradoxes are frequently on his mind when reflecting on the composition of his own music. Build Music, Nabay’s second album for Luaka Bop, embodies the conflicted nature of his own life as a musician in the United States. He considers himself — at the same time — a spokesperson for the ancient Bubu music of his Sierra Leonean homeland, and a self-described “black cowboy” on a trans-Atlantic mission to sculpt his futuristic music with the mindset of a revolutionary artist.

Nabay’s personal story has been told often in the press — he is a resourceful and resilient émigré who fled the trauma of Sierra Leone’s civil war of the 1990s, and has spent many years working a chicken fryer and on food trucks to support himself. In 2010, aided by the enthusiastic support of PRI producer Wills Glasspiegel, Nabay fell into a crowd of celebrated Brooklyn musicians who joined him as collaborators. In 2012, Nabay released his acclaimed debut in the United States, En Yay Sah (Luaka Bop) to praise from Pitchfork, Vice, NPR (Best of 2012), The Boston Globe, and The Washington Post (Best of 2012). In En Yay Sah(translation: “I’m Scared”), Nabay and the Bubu Gang developed Nabay’s songs into an improvised weave of guitars, keyboards, backup vocals, and electronic drums. 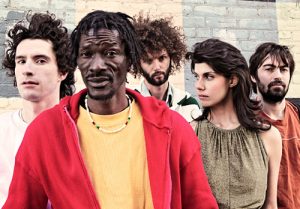 The result is a bubbling Bubu cocktail with Nabay as mixologist. Certain tracks retain the live band flavor of the previous record (“Build Music,” “Popeneh,” “Santa Monica” “Stop Jealous”), while others are culled from Voice Memos recorded on tour from an iPhone (“Game Over,” “Kadiatu,” “Tek Lak la Gben ba Kun”). Some are updated, reimagined versions of old songs Nabay had recorded in the 1990s (“Sabanoh”, “Angbolieh”), while others are vocals sung over original Sierra Leonean “riddims” (“Sabanoh”, “Bubu Dub”) that were created by collaborators back at home (Lanzo on D Beat, the late Tunni Boy, and the late Nfagie Kabeh of the Kabeh Brothers). Nabay typically uses Casios to imitate the sound of bamboo bubu horns — and he continues that technique on Build Music — but for a few tracks, Mehlan loaded up samples of bubu horn recordings made by documentarian Wills Glasspiegel, who had collected a set of fourteen bamboo bubu horns during a research trip to Sierra Leone in 2014. With the sampled original flutes piping along on “Angbolieh” and “Santa Monica,” Nabay’s music exudes a sense of hyperreal mysticism.

Sung in Sierra Leone’s lingua franca, Krio, his native tribal Temne, as well as English and bits of Arabic, Nabay’s songs sound infectious, inventive, and entertaining on the surface. But a listen with the translations of Nabay’s lyrics in hand reveals complex layers of meaning and discontent. “Game Over” expresses a strange mixture of hope and despair. “Santa Monica” is a joyous affirmation that relates a traumatic story of being harassed by the Santa Monica police just prior to his performance at The Getty Museum. Others are drunken calls to celebrate (“Popeneh”), self-reflexive songs about the power of songwriting itself (“Build Music”), love songs (“Stop Jealous”), and pleas for social cohesion (“Combination”).

Build Music is an intricate follow-up to the bluntly ecstatic energy of En Yay Sah. Over the course of three years, Nabay has returned to the studio to reimagine a Bubu music, which, like Nabay himself, maintains his inimitable and conflicted voice in a hypermodern world.