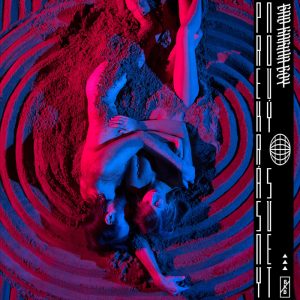 On the occasion of the release of Prekrásny nový svet (Beautiful New World) studio album by Bad Karma Boy we interviewed the guitar player, singer and the author of most of the lyrics, Juraj Marikovič.

Your latest studio album is your third one in a row. In what way does it differ from your previous ones?

“The album was particularly affected by three key things. First of all, we knew how we wanted it to sound and we knew that if we weren‘t 100 % satisfied with it, we wouldn‘t stop working on it. Another change was that Adelka started singing and composing the songs. Last but the absolutely essential point was that for the first time we had the producer, Pista Kralovic (FVLCRVM, NVMERI), who moved us to a completely new music universe.”

Who was involved in lyric writing and composing the individual tracks?

“I am very glad this time I was not the only one in charge of composing. Currently, there are two of us, Adelka and I who cooperated on this album at the rate of 3 to 5. However, both of us got involved in the composition of all the songs, not that each of us dealt just with the tracks he/she was the author of. This cooperation seems to be working for the time being.”

What were you influenced most in the process of composing new songs?

“Since I am not the author of all the songs, I can speak just for myself. It might seem a cliché but for me, the real objective of composing is searching for new sounds (harmonies), and the aim is to achieve something new. That inspires me most. When I get back home after a day spent in the studio and I play the demo in the evening and have no idea what part I played there, it means that I am heading the right way.”

What was written first, lyrics or the music?

“It changes with every single album. For the first album we composed music first and then wrote the lyrics. This time lyrics and music came hand in hand (simultaneously) but we gave more importance to lyrics. We got rid of quite a lot of ideas in case we had realized the text was not powerful enough even though from the musical point of view the track might have sounded appealing.”

You take the advantage of the privilege of your own recording studio. On average, how long did it take to record one song? If you had recorded the individual tracks in a different place, would the recording have taken less time?

“Running one’s own recording studio might be a disadvantage since one can go on and on analyzing all the details of a song. This time we did it a special way. We sent all recorded tracks to our producer who added his own ideas and together we made a deal. Subsequently, all the individual recording tracks underwent mixing by Marek Šurín and just the best “passed“.

One of the pros of having one’s own recording studio is that from the very first idea we work in usable quality and quite a high number of the instruments recorded for the demos stay in final mixing so we do not lack the original spirit and mood of the tracks, which is, after all, the most important thing when you have finished working on the album. Couple of times we had a discussion whether to go and record the finished tracks to some other place but decided that we do not want to lose the original mood of the songs. We might go for it in the future, though.”

You were a member of Para for quite a long time and had a concert experience in front of a large audience. Would you like to play in front of a big crowd with Bad Karma Boy as well?

“I think we have this question clearly settled in the band. For sure, it is an awesome feeling to play for a large crowd. We try to make songs which amuse us as well as the songs we will not be ashamed of in 5 or 10 years. If they are appealing to a larger audience, that will be great, if not, we will stick to performing in clubs.”