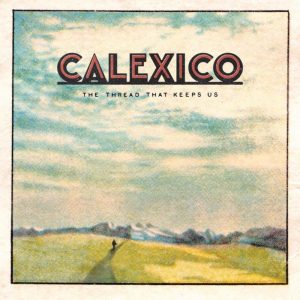 The ninth studio album from Calexico, ‘The Thread That Keeps Us’ is a family portrait capturing their stylistic variety and unpredictability while still finding solace in limitless creativity.

In bringing the album to life, vocalist/guitarist Joey Burns and drummer John Convertino found a spiritual home in unusual surroundings—not in Arizona, but on the Northern California coast in a home-turned-studio called the Panoramic House. Built from debris and shipyard-salvaged timber—and dubbed “The Phantom Ship” by the band—the grandiose house and its edge-of-the-world-like ambience soon made their way into the songs. The specter of California also had a powerful effect: as both dream state and nightmare, its infinite duality is mirrored in the music, giving Calexico a new direction and new edge. With less polish and more grit than ever before, ‘The Thread That Keeps Us’ both honors enduring traditions and reveals Calexico’s supreme confidence in songwriting, ultimately setting a whole new standard for the band.

As heard on the album’s lead single and opening track, the drama of the landscape directly impacted the making of ‘The Thread That Keeps Us’. Driven by sing-song melody and galloping rhythms, “End of the World with You”discovers an unlikely romanticism in volatile times. With its lyrics illuminating “Love in the age of the extremes,” the track is the perfect intro to an album that endlessly explores the contrast between bright and dark, hope and fear. 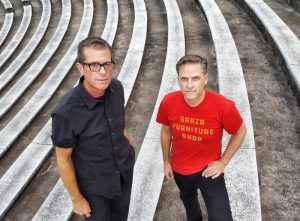 Working with their longtime engineer Craig Schumacher, Calexico co-produced ‘The Thread That Keeps Us’, gathering musicians from across the globe to dream up an earthy yet expansive sound spiked with jagged guitar tones and flashes of distortion. “There’s a little more chaos and noise in the mix than what we’ve done in the past,” Burns points out. Although that chaos has much to do with “where we’re at right now as a planet,” it also echoes Calexico’s dedication to constant experimentation. “Whenever we’re writing and we come up with something that feels too familiar, someone will end up saying, ‘That feels good, but let’s keep going and see what else we can uncover,’” Burns says. “It’s been really important to the arc of this band’s evolution for us to always keep on trying new things.”

Like “End of the World with You,” much of ‘The Thread That Keeps Us’ captures the anxieties and unease of living in tumultuous times. But while the album draws a kinetic energy from all that uncertainty, its lyrics unfold with a literary nuance and sense of setting and character. “Instead of writing straight-up protest songs, I want to tell stories,” Burns says. Largely inspired by his wanderings around Northern California during the album’s production, the narratives embedded in the record reflect on displacement, transitory existence, and—in Burns’s words—“returning to your home after being gone for some time and seeing how things have changed, and maybe not in the best way.”

This year Calexico will perform at festivals Pohoda and Colours Of Ostrava.