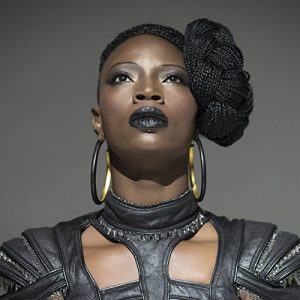 Africa has its internationally acclaimed female voices and the voice of Dobet Gnahoré has made its mark there. With “MIZIKI”, the voice of the multi-talented Ivorian singer resonates African sounds mixed with samples of electronic music, a subtle blend revealing a musical style which echoes her own character – freedom. The freedom to make a fifth album in which modernity feeds on tradition and heritage. Inspired by her travels all around the world (more than 800 concerts since 2004), Dobet shares a new and hitherto unsuspected side of her personality. It took four years to compose “MIZIKI”, probably her boldest, most personal and successful album and one which pays homage to the two principal causes she supports: a rich, generous and unified Africa and the strength of African women. In her words and on stage,

Dobet, the standard-bearer of a new generation of daring and determined Africans, celebrates the valiant, kind and altruistic woman. Songwriter, composer and performer, Dobet entrusted the production of “MIZIKI” to Nicolas Repac (Arthur H, Mamani Keita, Republica Ideal de Acapulco). This album is the result of the fusion of their two identities: Dobet loves the music of Africa (Yemi Alade, Miriam Makeba, Brenda Fassie… the list is a long one) but is equally enthusiastic about Björk or Christine and the Queens… a fact which Nicolas Repac clearly took on board. Faithful to the languages of Africa – Côte d’Ivoire has 72 dialects – for this album – possibly her best yet – she concentrates on Bété, her mother tongue. Dobet Gnahoré has definitely reached a turning point and has left labels behind to express her frankest and most sincere emotion more precisely. “I want to make people dream while remaining a free artist”. Mission accomplished, enchantment and melody in the lead. She was born far from the city and at the age of six in Abidjan she once again met her father, a recognised master percussionist who had helped set up the village of Ki Yi M’bock where he then lived. Place of a Utopian 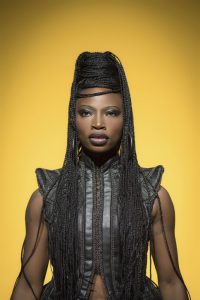 experiment, we work from five in the morning, studying music, dance and theatre, everything needed to become a complete artist. People of all nationalities meet there and African stars come to breathe and emulate its atmosphere: Ray Lema, Youssou N’Dour, Salif Keita and Lokua Kanza are frequent visitors. Dobet soon realised that here was where she would learn about life. She attended school in that unique place and learned through working and watching. Her meeting with the guitarist Colin Laroche de Féline did the rest, leading her to singing and taking her to France in 1999.

Inspired by exceptional encounters such as Angélique Kidjo and Lokua Kanza, Dobet started modelling and fashioning her voice, described as “rather special, very strong, capable of expressing the highs and lows …” and came to the attention of the Belgian label Contre-Jour for which she made four album. After several tours in the United States and performing all over the world (Africa, Asia, America and Europe), she confesses “When I’m not travelling, I get depressed”. In 2010, through the voice of India Arie who changed her song “Palea” to “Pearls”, she won a Grammy Award… In the same year, the Guardian newspaper described her performance as “the WOMAD festival’s best act”. The girl from Ki Yi M’bock continued her ascent with “MIZIKI”, for the first time affirming her role as a composer. Starting with the melody, she
delivered little musical phrases which went straight to the heart. “I compose alone because I want to marry my creation so as to give it to the public”. Not descending into dance music and not forgetting tradition, but with Nicolas Repac’s support, she issued an album which is more electronic with its samples and sonorities. The roots of “MIZIKI” lie in the “ball of fire” which burns within her. Her words are simple, direct
and therefore universal. “Akissi“ speaks of the rebel she will always be, “Miziki“ of her love for music, “La clé“ [“The key”] of a lost love (and a new one found), while “Education” is essential for emancipation.