It’s Féloche introducing the sassy sound of his mandolin, and his crazy, romantic style.

Féloche has seen the world, and by that, we don’t just mean he’s travelled. Wherever he goes, he makes friends, with his huge, bright smile that seems bigger than he is. Everywhere he goes, he becomes a local, whether he’s on the island of La Gomera, in New York, Ukraine, Romania or Argenteuil. He shares and people share with him: compelling stories, a whistle from paradise, vintage sounds dipped in dirty rock, beats, flow, and inspiration. 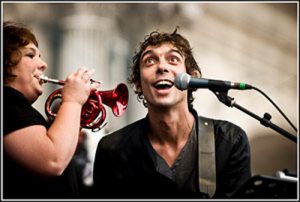 Féloche has summoned all his heroes, myths, experiences and dreams to his mixing desk for the musical revelry that is his new album, Chimie Vivante.

His attention to detail and perfectionism leave him no respite. He throws himself with the same sincerity into every aesthetic, exploratory, humoristic, political, graphic and scenographic dimension opened up by his music. Now that his guests are gone, Féloche is preparing to reincarnate them on stage with his magicians Caroline Daparo, Christophe Malherbe and David Rolland. With him, these musicians form a band that is made for the stage.