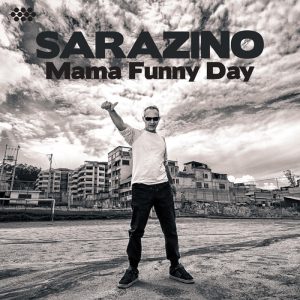 Sarazino is the brainchild of Lamine Fellah, a musician, songwriter and producer whose nomadic life is reflected in the multicultural influences in his songs. Fellah is a true child of a globalized world and Sarazino’s music draws on reggae, Latin and African grooves, Arabic music and catchy, international pop to create an upbeat celebration of the diverse world we all share.

Fellah was born in Constantine, Algeria, on March 3, 1970.  His father was a career diplomat whose postings brought the family to live in Spain and Switzerland, as well as the African countries of Burundi and Burkina Faso. While living in Africa, the young Fellah was exposed to many different varieties of West African music styles as well as reggae, which was very popular in Africa at the time.At an early age, Fellah was introduced to Arab-Andalusian music and Spanish flamenco by his mother, and grew up listening to popular French music.

In 1984, when he was 14 years old, Fellah bought his first drum set and soon became interested in writing his own music. Fellah was living in Burkina Faso at the time, and the fertile musical environment inspired him to form a band with some local friends. In 1988, Fellah moved to Canada to get his degree in political science and economics at the University of Montreal.  His true passion, however, remained with music.  Montreal’s active nightclub and festival scene gave him plenty of opportunities to explore new sounds.

In 1993, tragedy befell Fellah’s family when Islamic radicals in Algeria assassinated his father and forced the rest of his family into a life of exile from their homeland. This intensely personal confrontation with fundamentalism and violence had a great impact on Fellah’s music, which emphasizes the need for personal and political freedom while encouraging people to love their neighbors and celebrate our commonalities as well as our differences.

Fellah formed the original incarnation of Sarazino in Montreal in1995, and the project’s first album was released in 1997. While all of the songs on Et Puis Voilawere in French, the music fused African, Algerian and French influences. The album was well received, but it was not a huge commercial success, and Fellah decided to focus on traveling and exploring the world. 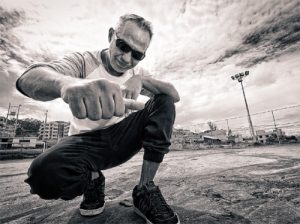 On a trip to Ecuador in 1996, Fellah fell in love with Latin America and Latin music. He decided to move to Quito, where he now has an active music production business. In 2003, the second Sarazino album, Mundo Babilón, was released by Ecuadorian label MTM, and the Latin American influence on the project’s music was already apparent. The release attracted the attention of Putumayo World Music’s then head of A&R and music research, Jacob Edgar, and two of Sarazino’s tracks ended up appearing on Putumayo collections (World Party and Latin Reggae).

Eventually, Edgar went on to form the acclaimed independent record label Cumbancha, which signed Sarazino in 2009. Sarazino’s first album for Cumbancha, Ya Foy! (which means “no problem” in the Dioula language of West Africa) presented a musical melting pot of roots reggae and Latin grooves with Arabic and West African flavors spicing up the mix.

The album received excellent reviews, with the Boston Heraldcalling it “Relentlessly upbeat. Totally cool” and Sarazino toured North America for the first time in the summer of 2010, opening for African superstar Angélique Kidjo at San Francisco’s prestigious Stern Grove and thrilling audiences in Montreal, New York, Los Angeles and more.