It’s been six years since Fleet Foxes’ last record, and in the meantime, frontman Robin Pecknold has been up to plenty. First he marched straight into the world of academia, enrolling at Columbia University before taking a step back, trading college for cabins. He took a 12-week woodworking course. He practiced both traditional craftsmanship and musical craftsmanship. He confronted the anxieties that overwhelmed him as the result of the band’s 2011 Grammy nominations and nonstop critical praise. All of that should act as natural fodder for a new album, a chance for Pecknold to work through some tough personal episodes and those overwhelming reflections on his self-worth, ideally leaving him in a better place upon finishing it. It should, but somehow it doesn’t.

Pecknold’s experiences make for fine interview fodder, but when funneled into an album—as they are on Fleet Foxes’ third album, Crack-Up—they fall strangely flat. Whatever vividness of those highs and lows, whatever challenges they produced that prompted the band to step out of the spotlight right at the height of its popularity, hardly any of that is captured here. Instead, the emotions that guide Crack-Up play out as a monotone hum, brought to life by gorgeous, sweeping instrumentals that work wonders in the moment, but fail to leave lasting impressions for lack of lyrical tentpoles. Fleet Foxes found success in the past because of how they wed crystalline harmonies with vintage folk storytelling. The 2008 Sun Giant EP emphasized guitar work; that year’s self-titled full-length shimmered with halcyon memories; and follow-up Helplessness Blues trotted carefully through knotted risks. Crack-Up is another beautiful listen, as usual, but it’s too vague to be distinctive.

It’s also weighted down, running just shy of an hour but feeling like the length of a feature film. The average song clocks around five minutes, making the 11-track album an epic hike that, for all the lovely melodies along the way, fails to lead to any momentous overlooks. Sometimes that pays off—there’s some intricate, almost proggy changeups that come as a welcome surprise because of how carefully plotted everything else is—but the majority of the record is uniformly vanilla, too overwhelmed by lush strings and pastoral pleasantness to deliver a decent hook. It’s stunning in its orchestration, yet it fails to leave much of a mark beyond that overall prettiness. 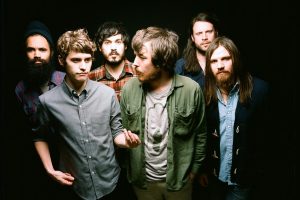 If listeners surrender themselves to the vagueness, a handful of songs could whisk them away, charming them with their lavishness. The vocal descent in “Kept Woman” hangs in the air while complex chord changes cushion its fall. On “Third Of May/Ōdaigahara,” Fleet Foxes return to their classic, full-bodied folk, a call to run outside into the sunlight and twirl, even when the nine-minute opus dabbles in relaxed, experimental string work. Then there’s “Mearcstapa,” the type of refined jam that triple-A radio listeners wish played on air but never would because it lacks a catchy chorus. No track on the record finds open-ended beauty quite like “I Should See Memphis.” It’s an airy, classical composition with the familiarity of a song written in Pecknold’s bedroom, where he sings about a romantic ultimatum near backroads over a sea of strings—an amalgam that’s unexpectedly pendulous, mesmerizing in its minor developments and background violins.

When a little nervous instrumentation is introduced, like the vaguely noisy drone and scratching at the end of “I Should See Memphis,” it adds some welcome energy to Pecknold’s obvious songwriting chops. The pulsing heartbeat sensed in the back of the first few songs, like the eerie note of a David Cronenberg film, comes to the fore in “Cassius, –,” where it collides with a skipping record, then pairs up with orchestration reminiscent of Grizzly Bear’s Yellow House. But as with other unusual “instrumentation” on the album—including mellotron, cicadas, and “pencil on paper”—it just gets lost in the overworked mix.

Perhaps that’s not too surprising. After all, this is a record that’s seen more planning, re-recording, and edits than most bands can claim, tracked over the course of seven months and three seasons in six different studios. The sheer abundance of the instrumentation here shows a close eye to detail. Even the album’s opening number, “I Am All That I Need/Arroyo Seco/Thumbprint Scar,” begins exactly where the last notes of Helplessness Blues closer “Grown Ocean” ended—an intentional choice that reveals that no note in Fleet Foxes’ catalog is placed by happenstance. The band has always prided itself on ornateness, and in that sense, Crack-Up is its richest release to date.

But more often than not, all that fussiness robs it of any impact. “Fool’s Errand” begins as a jaunty dance between tambourine- and Spanish-inflected ’70s folk guitar, then takes an unexpected turn into solemn hymnal coos lowering themselves into a stark silence while Pecknold plays piano despondently. It’s a heart-wrenching closing segment that could be a song in itself, but because it’s paired with the celebratory birdsong before it, that solitary moment immediately gets washed over and forgotten. Crack-Up is filled with instances like this. “On Another Ocean (January/June)” uses half its length to build up to an open, guitar-filled resolution, the start of which could have been half a minute at most. Tracks that note their various sections in the title, like “I Am All That I Need/Arroyo Seco/Thumbprint Scar,” blend together so seamlessly, you forget about them the second a new one starts.

Being safely pretty enough to avoid leaving any real mark is arguably the biggest stereotype of folk records—and of Fleet Foxes in particular—and Crack-Up does little to disavow that. In fact, the most intriguing part of the entire album, just as impactful on first listen as it is the 10th, is its final 30 seconds. A person who is presumably Pecknold walks down a flight of stairs, through a room, and out a door into the outside. Accordingly, Crack-Up sounds like an artist trying to figure out where he stands and why he’s standing there. Maybe it’ll give him some insight worth sharing on the next record.