Ibeyi’s stellar self-titled debut album was a flashpoint that steeped itself in brittle electro-drenched R&B and roots Yoruban percussion and openly engaged the saints of Santeria: its introduction was an invocation to Elegua (the gatekeeper between worlds) and the goddess of wind and storms in “Oya.” On the French/Cuban sibling duo’s sophomore effort, Lisa-Kaindé and Naomi Diaz address matters more corporeal and rooted in lived experience. The spiritual here is an inspirational tool for understanding and confronting suffering and injustice. Ash is an album directly affected by the tension of the times. Its songs address female empowerment, racial injustice, loneliness, and love in a brittle yet warm mix less frenetic than its predecessor. Singing again in mixed French, English, and Yoruba, the set opens with “I Carried This for Years,” with a sample from Le Mystère des Voix Bulgares and Naomi’s bata and cajon entering amid loops and a synth bassline before the chant “Away Away.” They are answered line by line by a wordless male chorus. The bata introduces the second single (and video), “Deathless.” Its narrative relates an encounter between a then 16-year-old Lisa-Kaindé and a white French cop. It resonates with not only the immigrant experience in Europe but with recent events on the other side of the Atlantic: Charlottesville, Virginia; Ferguson, Missouri; Baltimore, Maryland; etc. The vocals are almost ethereal as they deliver the bewilderment, confusion, anger, and resolve anchored by those drums, a crunchy loop, and Kamasi Washington’s tenor saxophone acting as a spirit guide, adding woven lines between and after the singing: “He said, he said/You’re not clean/You might deal/All the same with that skin.” Their response? Defiance: “Whatever happens/We are deathless….” 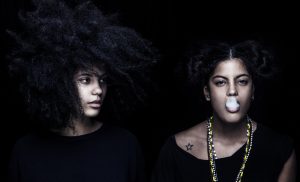 In “No Man Is Big Enough for My Arms,” Ibeyi’s layered choral-style chanting of the title is accompanied by Michelle Obama’s immortal speech: “The measure of any society is how it treats its women and girls…” as cajon and bata encircle the synth ambience and looped bassline. “Transmission/Michaelion,” the set’s longest track, pairs the siblings with Meshell Ndegeocello’s bass, Lisa-Kainde’s dirge-like piano ambient noise, and multi-tracked choruses in staggered cadences as certain lyrics (drawn from the diaries of Frida Kahlo) juxtapose the spirit call of the natural world, love, and the state of the human soul as it longs for freedom: “Transmission/Lightening the layers of the past/At last, at last/We sing and our tears dry/Facing a clear sky….” Spanish rapper Mala Rodriguez assists on “Me Voy,” an emotional account of the decision to leave her beloved in pursuit of something more fulfilling and humanly edifying. (Lisa-Kaindé wrote the song when she was leaving Cuba.) The deep bata meets squelchy synths and electro basslines inside a melody equal parts cumbia and bolero. In the end, Ash is many things: militant, vulnerable, and tender; it is urgent yet unhurried, its sharp edges unapologetically exposed. It is rooted in struggles and seeks victory, not deliverance. It is not only memorable, but indomitable and beautiful.