During the quarantine period, Gorillaz released their seventh album, entitled “Song Machine, Season One: Strange Timez”. There is an unpredictable pop conglomerate on it, which was also contributed to by various guests.

This year, Gorillaz returned with new music and a new release structure. “Song Machine” is a web series with new installments posted about once a month, each of which features a new track.

The episodes, overseen by Mr. Hewlett, offer a clever mix of live action and animation and have a loose narrative thread, but they are essentially music videos.

Now Mr. Albarn and Mr. Hewlett have sequenced the songs from the series into the project’s seventh studio album, “Song Machine, Season One: Strange Timez”,

Gorillaz’ hugely popular Song Machine project, announced earlier this year, gathers together the output to date on this compilation.

“Song Machine, Season One – Strange Timez” is released on regular and deluxe CD and vinyl editions, and contains 11 tracks in total featuring contributions from guest stars ranging from Slaves and Slowthai to Beck, Peter Hook, Fatoumata Diawara and Elton John.

The group served as a vehicle for Mr. Albarn to explore multifaceted pop outside the guitar-centered music of Blur. He mixes hip-hop, exotica, dub reggae, punk, bossa nova and more into a postmodern aesthetic.

By the way, Albarn recorded a total of eight albums with Blur. Let’s be surprised if this number is even higher with Gorillaz. However, all indications are that the possibilities of this project are unlimited. 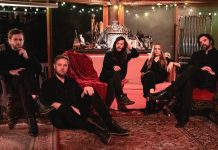 OTHER LIVES AT THE ALBUM FOR THEIR LOVE DESCRIBE HUMAN FEELING