When « HAVANA MEETS KINGSTON » when Cuba meets Jamaica. These two islands are so different yet so close. Two countries passionately linked to music where migration and diversity provide a cultural mix and hotbed of creativity. That is why ‘Havana Meets Kingston’, released November 3rd via Baco Records, is such a special and important project. The creation of Australian globetrotter producer Jake Savona aka Mista Savona, it is the first ever album collaboration between Jamaican and Cuban musicians and also the first album sung simultaneously in Spanish, English and Jamaican Patois.

Recorded at Havana’s famed Egrem studios in Cuba over the course of eight days, the album is a melting pot of traditional and contemporary Cuban and Jamaican music and brings together the best artists from both islands including Sly & Robbie, Bongo Herman, ‘Bopee’ Anderson, Ernest Ranglin, Rolando Luna and Barbarito Torres from Buena Vista Social Club and Los Van Van. Inspired by Juan de Marcos González and Ry Cooder’s « Buena Vista Social Club » project, the musicians featured collaborated, composed and improvised together to create an incredible album of songs. By bringing together such gifted and established musicians into a unique recording situation, 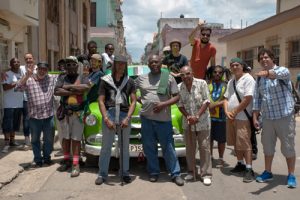 « HAVANA MEETS KINGSTON », showcases the best of each island’s musical heritage and encourages a completely new fusion of styles.

New single « Carnival », featuring Solis and Randy Valentine, is already making a splash across social media with the introductory music video going viral. Presenting a truly international musical experience, Valentine’s Jamaican flow and Solis’ Cuban vocals carefully merge with Cuban piano, a heavy reggae bass and Afro Cuban/Afro Jamaican percussion. Mista Savona is Australia’s leading reggae and dancehall producer, known for his high-quality production and world class releases. His distinct yet seamless meshing of genres such as hip-hop, roots reggae, dubstep, electronic and world music styles have earned him a reputation overseas as one of the country’s pioneering artists in the genre.

Mista Savona records and tours regularly with some of Australia’s leading singers and mc’s, as well as collaborating with a host of international artists from Jamaica, Europe, the Pacific and beyond.