Currently celebrating 20 years piloting his revered record label Bella Union, Simon Raymonde has scaled another personal peak, a new collaboration with drummer Richie Thomas. They’re called Lost Horizons, and their stunning debut album, Ojalá, released 3rd Novemberon Bella Union, is a rare sighting of two gifted musicians who, for different reasons, have been largely absent from music-making for the last 20 years. Yet the record is proof of a telepathic relationship through music, established when the pair first became collaborators and friends in the eighties.

Ojalá also incorporates a heady cast of guest singers. Some are signed to Bella Union, such as Marissa Nadler, former Midlake frontman Tim Smith, Cameron Neal (Horse Thief), others are long-time favourites of Raymonde’s (Liela Moss of The Duke Spirit and Ghostpoet), or newer discoveries (Beth Cannon, Hilang Child, Gemma Dunleavy and Phil McDonnell). And then there is the incomparable Karen Peris of The Innocence Mission, one of Raymonde’s most beloved artists, in her first collaboration outside of The Innocence Mission and solo recordings.

Together, the Lost Horizons ensemble has created an hour of exquisite, expansive and diverse spellcasting, from facets of soul (‘Bones’, featuring Cannon, and ‘Reckless’, featuring Ghostpoet) to dreamier invocations like ‘She Led Me Away’ (featuring Smith) and Ojalá’s lengthiest trip, ‘The Engine’ (featuring Hilang Child). There’s the odd louder, faster detour, like ‘Life Inside A Paradox’ (featuring Neal, with Sharon Van Etten on backing vocals), but the dominant mood is a deep, rich melancholia.

Lost Horizons have shared a first track from the album entitled “The Places We’ve Been”, featuring Karen Peris on vocals, which you can listen to below…

Before he started Bella Union, Raymonde was the bassist of the seminal Cocteau Twins, where the vein of melancholia went very deep. Even before the band had signed to 4AD, the label were releasing records by the instrumental quartet Dif Juz, arguably the first word in post-rock, 15 years before it became a trend: Thomas was their anchor; the engine room of their wondrous free-flow. The two bands became friends, and toured together. 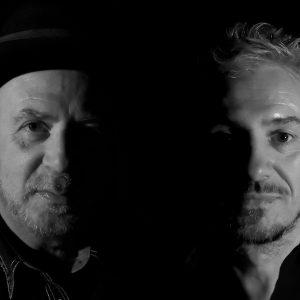 “Dif Juz are still one of the best live bands I’ve ever seen, and I adore Richie’s drumming,” says Raymonde. “He plays in a really unusual style, with his hands around the wrong way… He’s got a dub-reggae style, but with a jazz feel. He makes the whole drum kit come alive.”

Raymonde and Thomas had made demos together in the eighties, but filed them away – though they did collaborate on ‘Ivy And Neet’, found on This Mortal Coil’s second album Filigree & Shadow (1986), with Thomas adding a spiralling saxophone to Raymonde’s improvised piano. But both found their journeys diverging. Long after Dif Juz split, Thomas had toured with The Jesus And Mary Chain, Moose, Felt and, in the nineties, Cocteau Twins. But as he recalls, “The business side of music became too painful. I had too much love for music that wasn’t returned. But Simon has music in his heart and soul, he’s extremely talented, and I wanted to get him making music again. And when the idea of jamming together came up again, I got really excited, which I hadn’t felt about music in ages.”

The pair booked four days in an east London studio, with Raymonde on piano and Thomas on drums, and a simple plan: “It must feel like fun, never a chore, and it had to be improvised,” Raymonde explains. If it never became a record, it didn’t matter. It was all about recapturing that feeling when you’re 15, making music with friends.”

Raymonde added bass, guitar and occasional electronics at his home studio in Brighton, turning improvisation into songs, and a second four-day session was booked – the day that David Bowie suddenly died. “I didn’t know if I could go through with it,” Raymonde says, “Richie was just as upset, but he said, ‘Let’s use that energy, and power through,’ and I’m so glad we did. That energy and excitement is still on the finished record.”

As the songs took shape, Raymonde began thinking of singers to approach that would suit each, and to his surprise and joy, they all agreed. The same ground rules as the original sessions applied: “There were no, ‘Am I going in the right direction?’ conversations. It had to be about the moment, about what felt right.”

Given the role of guest singers, the common ground that Raymonde and Thomas shared, and the love of melancholia, it’s not surprising that Ojalá has something in common with This Mortal Coil – underlined further by the plan to add a bonus disc of ambient recordings that evolved into solo piano pieces, similarly transformed into haunting song, “as a quieter contrast to the band pieces,” says Raymonde. “I love the tracks I’m not playing on just as much,” says Thomas, referring to ‘Frenzy, Fear’ (featuring Hilang Child), ‘Winter’s Approaching’ (featuring Nadler) and ‘Stampede’ (featuring Lanterns On The Lake’s Hazel Wilde). “They’re super-emotional. And to be involved somehow in that music made it even more powerful.”

Indeed, Ojalá was made for its core duo’s need to make music, and to create something beautiful, and meaningful, in these dark times. It’s why the record is named after the Spanish for “hopefully” (or “God willing”).