IKOQWE are a pair of fictional characters who, coming from a distant time and space, are confronted with today’s world. Their impressions are conveyed over the course of an exciting album which blends electronic music, hip hop and the sounds of ancestral instruments from Angola.

“Pele” (‘skin’) is the first single off the forthcoming debut album by IKOQWE (pronounced ee-kok-weh), a new project by Batida (the Angola-born, Lisbon-raised artist who ranks among the leading exponents of the new wave of African electronic music), and Luaty Beirão, aka Ikonoklasta, the Angolan rapper turned iconic activist.

IKOQWE’s inspiration comes from old school Hip Hop as much as from traditional Angolan music.

The album (entitled “The Beginning, the Medium, the End and the Infinite” and due for release on March 5, 2021) includes drum machines, vocals in Angolan slang, Umbundu, Portuguese & English, discussions about neocolonialism, iniquities & falsified history, radio sounds, utopian solutions, and much more.

IKOQWE’s inspiration comes from old school Hip Hop as much as from traditional Angolan music. Some of the tracks feature sounds from the rich archives of the International Library of African Music.

They obtained access to the archives, and sampled sounds taken from field recordings made in Angola by ethnomusicologist Hugh Tracey during the ‘50s.

“Pele” is a 3-track single, containing the album version, and remixes by afro house legend Boddhi Satva and by UK ‘disco noir’ band MADMADMAD. A Pele music video will also be released, including some footage from IKOQWE’s first live performance. 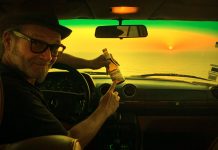 BAHAMA SOUL CLUB AND THEIR SOUNDTRACK FOR THE BOHEMIAN LIFESTYLE