The Bahama Soul Club are a German-based group whose unique blend of soul, jazz, funk, blues, bossa nova, afro and Caribbean influences has firmly put them on the map of the black music scene as one of the most exciting contemporary outfits. The band led by Oliver Belz started in 2005 under the former name of The Juju Orchestra.

Bohemia After Dawn, the soundtrack of a bohemian lifestyle compiled in 12 sunsoaked songs. After an endless time of silence around the German Nu-Jazz outfit they’re back! Laid back and lovely, matured and mellow to spoil us with their uber-cool vibe coming directly from the breezy Algarve.

“From countless ideas and numerous demos over the past four years, we handpicked those few songs that shone the brightest. “2018 saw a single release ‘Never Roam No More’ featuring the legendary John Lee Hooker. 2019 ‘Aint Nobody’s Business’ featuring Billie Holiday hit the scene. Another real legend, Sister Wynona Carr is featured on ‘Tears Run Down’. „Increasingly during production we became aware of the amazing complexity of local artists, talented individuals to be found performing all day and night in the bars and near the beaches. It would take more than a couple of albums to bring these troubadours together. So there are exciting ideas for the future!

For this album we began with just few, an eclectic mix, and we found our studio blessed with some serious vibes. Josephine Nightingale ‘Mercy Me’, ‘Castelejo’ and Taly Minkov-Louzeiro ‘Troubles all be gone’. The ultimate track on the album ‘Castelejo’ is dear to our hearts and an homage to the late Vitor Hugo, featuring Rui Correia on accordeon and vocals by Cutty Wren and Hedvig Larsson.

These artists are from the local neighborhood, quite literally across the lane. What a blessing, what a discovery! Last but not least … One of the most exciting voices in the Bahama Soul Club family so far … an ongoing love, Cuban artist Arema Arega is somewhat a permanent feature and shows her talents in ‘Mango’ and ‘Alma Sola’.

As if this weren’t enough we’re more than proud to announce two cool remixes from the masters of the scene: Mighty Club des Belugas and Smoove himself! Nuff said.

Bohemia After Dawn, matured for 4 sunny years doesn’t say “Hey, please like me”. It is just there, in its simple beauty, unobtrusive yet quietly confident. Every song shaped to the max, no compromises.

We are adding a short interview, which was exclusively given to us by frontman Oliver Belz.

What did you do the last four years and how often did you play live?

“First I moved to Portugal three years ago and built a new studio at the western part of the Algarve. During this time of course I worked on new material with my co-pilot André Neundorf, keyboard player and co-composer. We had lots of demos and ideas, but finally we handpicked those few songs that shone the brightest. Before Corona I played many gigs in the Algarve, but not with the Bahama Soul Club. Some gigs with a band and a few sessions. It’s always much fun and at the moment I miss it very much!”

When did you get the idea to compile a new album from the latest songs and how did the recordings come about?

“For me there can not be an album without any vision of the final product. So it always takes much time … Collecting ideas, creating demos, mixing songs, all without any vision … this process can take a while, sometimes a few years. Then, within the last year the vision gets more and more real and there were some ideas for artwork and album title. This is important to finalize the production as you know from this moment what you are missing to make your vision a real product. For the last three songs I invited some of the Portuguese artists which live around the corner. Thanks god! That of course was the missing link! I knew all these people before when we sometimes met on sessions in the clubs in the neighborhood. It was an experiment but the result is so amazing. For this album we began with just few, an eclectic mix, and we found our studio blessed with some serious vibes. Josephine Nightingale ‘Mercy Me’, ‘Castelejo’ and Taly Minkov-Louzeiro ‘Troubles all be gone’. The ultimate track on the album ‘Castelejo’ is dear to our hearts and an homage to the late Vitor Hugo, a dear Portuguese friend and fellow musician, featuring Rui Correia on accordeon and vocals by Cutty Wren and Hedvig Larsson. What a blessing, what a discovery! For sure there are many ideas with these people for upcoming projects in the near future.” 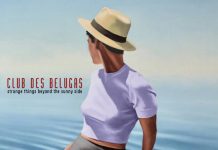 CLUB DES BELUGAS IS COMING OF THE AGE