The inspiration for Hollowbone comes from the wild, dramatic, weather-bitten countryside along Hadrian’s Wall, so quintessentially Northumbrian but, almost 2000 years ago, inhabited by people from around the world, worshipping different gods and following different customs.

Embracing that global perspective, Hollowbone brings some of the oldest Northumbrian tunes and songs throbbing to life, intermingling them with new material and binding it all together with contemporary resonance and attitude.

A case in point is the opening track “O-U-T spells out”:

‘An ironic look at borders, walls, barriers, Brexit; some people think it’s a gay anthem. We’ve had many questions about this song! In fact, it’s actually based on old counting, skipping and playground games from Northumberland and beyond… Hadrian’s Wall was never impermeable and walking by the ruins today is a timely reminder that barriers must always come down in the end..,’ comments Kathryn. The song also references the eponymous  ‘hollowbone’ – in shamanism the vessel for hearing ancient spirits, and the material for the oldest known musical instruments, bone flutes.

On “Nemesis” Kathryn collates words and melody ascribed to Mesomedes, a freedman in the time of the Emperor Hadrian, adding a new chorus inspired by Anglo Saxon kennings.

It’s not all ancient material. There are new songs and tunes to impress too, including “Holywell  Pool”, a poem by Kathryn’s dad, singer Mike Tickell, set to music by Kathryn and which includes field recordings (literally!) from outside Kathryn’s house and percussive rhythms made by stones from the local river. Everywhere you turn on Hollowbone, there are sounds to set the ears twitching and feet tapping and, with such titles as “Colliers”, “Darlington”, “Cockle Bridge”, Kathryn and her fellow musicians ensure that we are ever connected to the varied people and places of the north east throughout time. 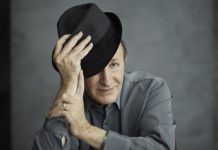 IDIR – A SONGWRITER WHOSE GOOD TO KNOW