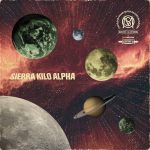 Nicky Bomba’s brassy musical powerhouse returns with the follow up to their 2013 self titled debut. With as many as 34 members on stage they must be a sound technician’s nightmare, let alone a touring manager’s, yet the MSO have quickly built a big following both here and overseas, playing everywhere from Glastonbury to headlining in front of 50,000 in Montreal.

Nicky says the new album was very much a collaborative effort and certainly it sounds more focused with a much more consistent result. It’s playful and catchy as hell, as good ska should be, but the MSO is more than just a big wall of sound paying homage to a genre. From the outset the band wanted to incorporate many other musical elements into their sound – jazz, funk and African rhythms amongst them.

The disc swings into gear from the outset with the intoxicating Escher, a song that sounds like ska from the Middle East – as mesmerising and enchanting as an Escher drawing. Sans Humanite is classic ska, invoking echoes of the 2 Tone revival of the 70s and 80s. 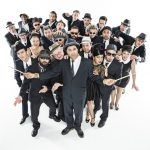 Throughout Sierra Kilo Alpha (from the phonetic alphabet for the genre in case you haven’t spotted it yet) the MSO is clearly honouring the genre’s legacy, yet they never lose their sense of fun in delivering the outcome. The current single Funkchunk is a typical example, chugging along like a brass fuelled loco over a swinging, sassy, melodic riff. Lyrically it just as readily draws a smile, like this from Bombay Detective “with 7 hidden cameras and a secret microphone, something like Columbo but much closer to the bone. He was rockin’ steady with the trigger ever ready”. The play on Colombo/Columbo is a nod to both the classic detective and the sub continent, all the while busting out some rock steady ska moves whilst working on the case. In conjuring a wonderful visual image it also proves to be both funny and clever.

With a sound that comes across like an instant party it’s no surprise they chose the Gold Coast to open their latest national tour on the day they launched the album.