Morrissey sure hasn’t made things easy on us. As he stumbles, gracelessly, deeper into the 21st Century, the Pope of Mope has given his fans more than enough reason to wince each time they click on a news item about the one-time indie king: chances are he’s made an incendiary, ill-thought-out political statement, or has canceled tour dates. Morrissey’s courted controversy since the beginning, but as time has gone on it’s seemed like he’s less concerned about provoking thoughts and more about provoking anger in the most embarrassing ways possible. (To many followers, he’s become the equivalent of that uncle you’ll always have a place for in your heart, but choose to keep his posts hidden from your Facebook feed.) Low in High School is his 11th solo record. The resulting record is, musically, one of his strongest in years, but lyrically, his most blunt, pedestrian, and disengaged from reality. 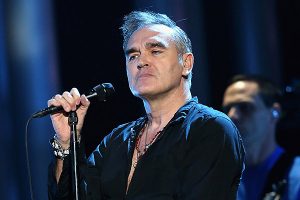 The record opens with “My Love, I’d Do Anything for You,” a Wagnerian blast of theatrical pomp, complete with a hard rock guitar riff, pounding drums, and a horn accompaniment that’s the opposite of subtle, the sort of song that Jim Steinman might have composed for one of Meat Loaf’s later Bat Out of Hell sequels. That description may sound atrocious, but it’s a great look for Moz, adding extra drama to the record’s most on-point set of lyrics. (“Teach your kids to recognize and despise all the propaganda,” he sings, putting additional oomph into each syllable.) It’s followed by “I Wish You Lonely,” also of sonic interest, underscored by electronic, industrial blurps that grew hokey by the mid-’90s but may be ready to come back in style. Morrissey has a habit of returning to the same targets over and over throughout Low in High School, from the armed forces (“A wretched outcast with no point of view, what could I do? Just military service…. Give me an order, I’ll blow up a border!/Give me an order, I’ll blow up your daughter,” he sings in “I Bury the Living.”) to the media again (“Stop watching the news!” he begs, over and over, in “Spent the Day in Bed.”) The Middle East is another popular topic, coming up in “Israel,” “The Girl From Tel-Aviv Who Wouldn’t Kneel,” and, oddly enough, “In Your Lap,” wherein he lyrically waxes on the Arab Spring while longing to go down on some unspecified muse. Even when it sounds like he might have something to say, all subtlety is tossed out the window. “Spend more on nuclear war if that’s your chosen illusion/Incinerate innocent men and women and children,” he croons over a clamorous percussion and tinkling ivories in “All the Young People Must Fall in Love.”