Two things immediately strike us when listening at Nancy’s music. The first is Nancy’s perfectly controlled, remarkably precise, highly distinctive voice, which has brought the young singer critical acclaim as “the finest voice in Cape Verde” among the new generation. The second is the wealth of musical styles that unfold against a background of meticulous classicism.

Nancy Vieira was born in 1975 in Bissau, where her parents had joined the leader of the struggle for independence in Cape Verde and Guinea Bissau, Amilcar Cabral. Cabral was assassinated in 1973, just before Portugal’s colonial period ended with the Carnation Revolution in April 1974. Cape Verde gained independence in 1975. Four months after Nancy’s birth, the Vieira family moved to Praia, Cape Verde’s new capital on Santiago, one of the archipelago’s ten islands. Born to this newly-won liberty, she would acquire a strong sense of identity on her political and artistic journey. Her father, an amateur musician, guitarist and violinist, became Minister of Transport and Communication in the new government. Ten years later, he returned to Mindelo, the busy, metropolitan port on the island of São Vicente, where he acted as the governor of the Barlavento Islands (the “windward”, northern islands).

When Nancy was fourteen, her father was appointed Cape-Verdean ambassador to Portugal, “which took in the French representation, so he went to present his letters of credence to President François Mitterrand,” explains the young woman, who has lived in Lisbon ever since. Nancy studied management and sociology at the University of Lisbon. One evening, she accompanied a friend to a song contest he had entered. Heard humming along, she was asked to sing and performed B. Leza’s Lua Nha Testemunha for the judges. She won. The prize was the chance to record an album for the now defunct Disco Norte label. The record promo@lusafrica.com was called Nos Raça (1996). Taking the time she needed to have a daughter and look after her, Nancy only released her second album, Segred, eight years later in 2004. She finally turned professional when Lus came out in 2007.
With her remarkable voice and radiant personality, Nancy Vieira has often been asked to perform duets with the stars of Portuguese music – fado artist Camané, rock singing star Rui Veloso and top groups including Alas dos Namorados. 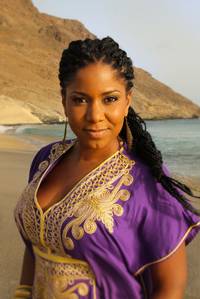 In the days of Portuguese colonial rule, São Vicente secondary school was an intellectual melting pot attended by the poet, morna writer and brilliant politician Amilcar Cabral. Nancy Vieira studied there too, absorbing the background sounds of the port of Mindelo: Maria Bethania, Caetano Veloso and Angela Maria (Brazilians), fado, mornas, coladeras, British pop, Cuban rumba and so on. Mindelo was the scene of this musical fusion and home to Cesaria Evora (1941-2011). Herculano Vieira, Nancy’s father, had been a captain in the merchant navy and had played with Cesaria in his youth, “before the struggle,” says Nancy. “I found that out in June 2011 when I was recording my album in Mindelo. It was the first time I’d been to see Cesaria at her home and she asked me, ‘How is Herculano?’ I found that moving. He’d never said a word about it.” Nancy is not precisely akin to Cesaria Evora, although their repertoires and musical associations definitely coincide. Their styles are different, though. Nancy Vieira’s voice is direct and clear compared to the sultry heat of the “Barefoot Diva”. The two have little in common in terms of personality, social background and life story. Yet what connects them is the secret affinity of Cape Verdeans for their music, which straddles the West and Africa: a music of ocean crossings and Creole culture.

Like Cesaria Evora, Nancy Vieira has a carefully constructed repertoire. Aside from the classics (B. Leza, Amândio Cabral), she performs works by Parisian Cape Verdean Teofilo Chantre and young songwriters based in Lisbon, especially Tutin d’Giralda. Then, as a sailor’s daughter, how could she forget the man who captained the Mindelo harbour tug, Manuel de Novas? She has found a previously unreleased song by him: an ode to magnetic attraction entitled Cigana de Curpin Ligante. Nancy also ventures into poetic territory never explored by the greatest of morna singers, Cesaria Evora. For instance, the work of Eugenio Tavares, theoretician of the genre, poet and adventurer, with his magnificent Na O Minino Na, inspired by a Cape Verdean tradition. Seven days after a birth, sweet, delicious words of Creole are whispered to the new baby just before his or her baptism: “Sono di bida, sono di amor, ou graça ou dor, ês é nos sorti” (Dream of life, dream of love, fortune or sorrow, that is our fate).