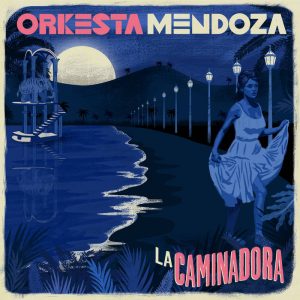 Sergio Mendoza is a true border crosser – born in Nogales, Sonora, but later raised the other side of the Mexico-U.S. divide in Nogales, Arizona… his musical upbringing traversed similar paths.

But it was only upon later arriving further north in Tucson and through his playing, writing and producing with the band Calexico that he came to realise the true potential and positivity of this apparent culture clash.

Having already explored the world of uniquely inventive re-interpretations alongwith Mexican Institute of Sound’s Camilo Lara as the arrangers behind Mexrissey, Sergio returns to the form here on a selection of tunes from the past, variously of Mexican, Cuban, Peruvian, North American …. and North Aegean origin – ranging from the surf-punk twang of “Tanger” (originally composed for just voice and piano), to what Sergio describes as “one of the most beautiful melodies ever written” – “Luna De Miel”, whilst also exploring the poppier end of the spectrum, even veering towards kitsch, on “Sombras” and finishing off with the classic “Tusk” – given a Fleetwood Mex makeover. 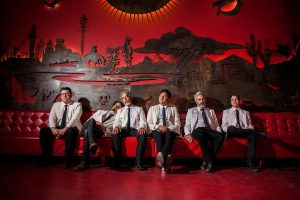 Recorded at Wavelab Studio in Tucson, AZ, the EP was produced and arranged by bandleader Mendoza with Orkesta stalwarts Jaime Peters, Sean Rogers and Marco Rosano. Sergio then invited some of his friends to come and sing. Collaborators include Phoenix, AZ native Quetzal Guerrero, taking lead on the title track; Brian Lopez, co-frontman of cumbia-psyche sensations XIXA (and an original member of the Orkesta), provides both harmonies and lead on “Cuando Yo La Conoci”; and opening up proceedings on “Llego La Banda” is Portuguesse fado artist Raul Marques.

Says Sergio: “‘La Caminadora’ is our take on these songs that we love so much. It’s also the best example of how the band sounds since it was all recorded and mixed in less than one month. Edits were minimal, therefore creating one of the most raw recordings of the band.”

Vacilando ‘68’s own involvement with Sergio stems from a trip out to Tucson in 2012, when we were introduced to him by Marianne Dissard, with whom Sergio was working at the time as co-writer and main musical foil on her third album ‘The Cat.Not Me’. Over lunch at Sergio’s favourite downtown haunt Cafe Poca Cosa vinyl plans were discussed which finally came to fruition with the release last year of side project Los Hijos De La Montana [critic/DJ Pete Paphides’ most played album of 2017]. Vacilando ‘68 is delighted to be part of this continually evolving journey.