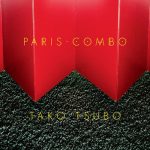 “Tako Tsubo”, the lounge-tinged title track of Paris Combo’s new album, is inspired by a rare condition known also as the “broken-heart syndrome” – thank goodness Paris Combo have the cure! On their new record, the chanteuse Belle du Berry leads us through a deliciously varied collection of musical atmospheres, ranging from the intimacy of the live combo to more lush orchestral settings and beautiful 60’s retro à la Bacharach with near-psychedelic overtones. 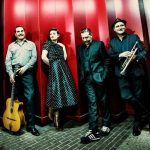 The lyrical leitmotif of this new album – suggested by the song titles, « Mon Anatomie », « Spécimen » « Anémiques Maracas », ID d’Heidi », « Profil » – is the human physique and the way our emotional and physical beings interact with each other. Songwriter Belle du Berry indeed sees the human body as kind of « machine », capable of feeling, permutating and expressing an infinite gamut of emotions.
“Over the course of five albums, the Paris Combo has fired the imagination of anyone who likes their music cool, continental, witty and more than a little mysterious”.- Boston Herald

Paris Combo, as diverse and sophisticated as the city from which they hail, have garnered critical acclaim and an immense following for their unique mélange of colourful cabaret, elegant jazz, gypsy swing and sassy alterna-pop, and here again, a combination of musical influences underpin the infectious, toe-tapping grooves which have become their hallmark. The album adds to the group’s already fabulously cosmopolitan musical palette and will only enhance their already considerable global attraction.