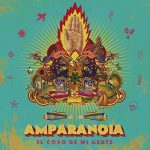 Amparanoia is the pseudonym of Spanish singer/guitarist Amparo Sánchez combining her first name with the word ‘paranoia’. It was also the name of the band she fronted from 1996 to 2006. Debut album, El Poder de Machín, has been described as being “bright, exuberant… with a heavy Latin influence”,[1] whereas the 2002-released Somos Viento has been called “a more acoustic blend of Cuban and reggae forms”
Born in Granada, Spain, in 1970, Amparo Sánchez joined her first band, the Correcaminos (Roadrunners) at 16, a year after apparently becoming a mother for the first time. With Billie Holiday as her chief inspiration, her ability at singing blues, soul, rock, and jazz quickly established Sánchez as the foremost vocalist in the region. She formed Amparo & the Gang in the early ’90s and the group released Haces Bien on Fabrica Magnetica in 1993, only to see the label fold two months later. Amparo & the Gang broke up and, despite plenty of work opportunities around Granada, Sánchez wanted to escape being locked into the blues circuit and moved to Madrid.

Starting in 1995, she spent 18 months developing an enthusiastic following playing around the Spanish capital’s active club circuit. She also expanded her musical range by absorbing classic Cuban forms through exposure to Madrid’s healthy Latin music scene while Manu Chao schooled her in other Caribbean styles. Sánchez developed a side group named Ampáranos del Blues (Protect Us From the Blues), that toured parts of Spain and southern France.

By December 1996, the first edition of Amparanoia (the wordplay gets better once you know it comes from the verb amparar, meaning to protect) was recording its first demo and quickly landed a deal with the Edel label. Amparanoia’s 1997 debut album, El Poder de Machin (a reference to bolero-singer Antonio Machin), is a bright, exuberant disc with a heavy Latin influence, but each of the group’s three releases has a distinct flavor. The hard-charging Feria Furiosa, released in 1999, reflects the participation of a contingent of radical Basque rock and punk musicians.

The line-up that made these albums fell apart late 1999. Amparo went on to record an album of children’s songs which she released as Los Bebesones.

A trip to Mexico late 2000 left its mark when she came into contact with the Zapatista communities in Chiapas. On returning to Spain, she organized a sound system mini-tour with like-minded musician friends to raise funds and Sánchez also went back to Mexico in March 2001 to take part in the Zapatista caravan in Mexico City.

2002’s Somos Viento resurrects a more acoustic blend of Cuban and reggae forms but with an Amparanoia twist. Violist Vesko Kountchev is from Bulgaria and introduces a new Balkan flavor to the mix, which is typical since the group lineup and guest artists always come from a wide range of musical cultures and usually a song or two per album has verses sung in English or French. But the international flavor of Amparanoia’s evolving sound just seems to be a natural outgrowth of Amparo Sánchez’s open, inviting musical personality.

In 2003, the year that Enchilado was released, Amparo recorded Don’t Leave Me Now with Calexico as backing musicians. The track appeared in 2004 on compilation Rebeldía con Alegría which covers all her albums except Bebesones.

In 2006 Amparanoia released their final album La Vida Te Da and recorded a live CD/DVD at the Barcelona Sala Apollo in November. Seguire caMinando was released in 2008 and promoted on a byebye-tour.