We will broadcast the april Transglobal World Music Chart on may 5, 2020 at 8pm.

Number one belongs in May 2020 to the Dzambo Agusevi Orchestra from Macedonia.

Dzambo was born in Strumica, eastern Macedonia, in 1987. His family had been musicians for generations and Dzambo’s father, Dzemal, worked in local orchestras. In the mid-1990s – that little Dzambo got seriously interested in playing trumpet. Every day he insisted on accompanying Dzemal to rehearsals where he would observe and listen. Back then he dreamed of owning a trumpet but his family had been reluctant to give him one, knowing how tough a musician’s life can be. Yet the conductor of Dzemal’s orchestra took pity on the little boy who studied the musicians with such intensity and gifted Dzambo his first trumpet. From then on there was no stopping him – with his eyes on the prize, the boy from Strumica set off about becoming the greatest trumpeter in the Balkans!

Whilst most of the boys in his age in Strumica, as almost everywhere, wanted to play with a ball as much as possible, he just wanted to spend more and more time trying to improve his ability as a trumpet player. Grudgingly, Dzambo did so but music was where his passion existed and, at the age of 11, he became a member of his uncle’s Koco orchestra.

Determined to continuing developing, Dzambo did not let the attention sway him from focusing on maturing as a musician. While he was deeply rooted in the brass band genre of the southern Balkans, young Dzambo kept his ears open and listened to music from both West and East – appropriate for a Macedonian youth, the former Yugoslav republic historically being a meeting point (and melting pot) for Ottoman and Orthodox cultures. Dzambo listened to Jazz and Turkish, Funk and Soul music, movie soundtracks and classical, all the time using his Gypsy heritage as the roots from which he developed his own distinctive trumpet style and sound.

As Dzambo matured into adulthood he founded his own band and became leader of the Džambo Agusevi Orchestra and so built his reputation playing weddings across the region. Word got out that he was the hottest trumpet player around and this meant, like gunslingers in the Old West, the Dzambo Agusevi Orchestra had to engage in showdowns with other brass bands. In 2006 they entered Kumanovo Trumpet Festival. Result: first place! Dzambo continued to win at Kumanovo every year up to and including 2011 – after this the organisers “banned” him from competing, so to give other musicians a chance! Dzambo then entered Pehchevo trumpet festival and blew minds there, he and his Orchestra winning all the prizes going. Dzambo knew he was thus ready to step up and enter the ring against the heavyweight Balkan brass bands in Serbia’s famous “Dragacevski Sabor” in Guca (also known as “Golden Trumpet competition”). Since the 1960s Guca has gained an international reputation as the most important brass band battle in the world. And in summer 2011, the Dzambo Agusevi Orchestra received the first prize and wrote his name in the history of this famous event: both the judges and the audience appraised the Orchestra and its young leader.

Known as the funky tiger of Balkan brass music, Dzambo could have rested on his laurels, earning a fortune playing glitzy weddings and big festivals. Yet the young virtuoso was not satisfied with such a career and has, since then, looked towards winning an audience across Europe and beyond. In doing so they have won many admirers.

Heralding the future of the Balkan brass sound, “Brasses for the Masses” is a reflection of Džambo’s vision for Balkan brass music. Across the albums twelve track journey Džambo pays respect to the regional roots of the genera, whilst combining hard grooves and uplifting melodies, bringing the music to the dancefloors of a younger generation. From humble beginnings in his Macedonian village of Strumica, to packing out festival dance floors across Europe as the leader. 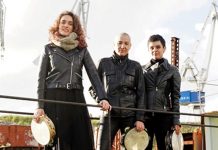 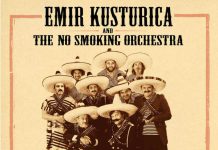 EMIR KUSTURICA AND THE NO SMOKING ORCHESTRA – NEW ALBUM AND FINALLY SO ON „FUCK YOU MTV!“ 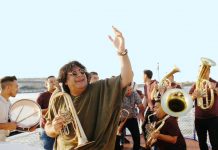