However, where that album found them maturing with a softer musical palette and weightier emotionalism, Gameshow is a dynamic shift away from the buoyantly kinetic guitar-based approach of their first two albums. Which isn’t to say they’ve completely abandoned their post-punk roots; tracks like the ferocious “Gameshow” and the dynamic “Surgery” are a perfect balance of Scary Monsters-era David Bowie and Seven and the Ragged Tiger-era Duran Duran. That said, the lion’s share of Gameshow is filled with 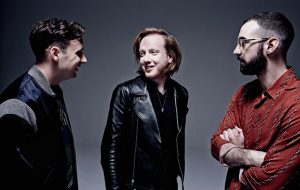 pulsing, neon-toned dance numbers that sound equal parts Giorgio Moroder and ’70s Bee Gees. While name-dropping influences feels a bit too easy for the high quality of songwriting on display on Gameshow, the enthusiastic nature by which Two Door Cinema Club have clearly gravitated toward these old-school dance club sounds is worth mentioning. In that sense, the metamorphosis from garagey post-punk to hip, R&B-inflected disco also brings to mind the similar trajectory of contemporary acts like France’s Phoenix and Canada’s Arcade Fire. Thankfully, the album never sounds like a retro pastiche, and instead the band has found a sweet spot between vintage cool and modern sophistication. These are vibrant productions courtesy of Beacon helmer Jacknife Lee, who frames Trimble’s yearning tenor croon with juicy laser-beam synths, Halliday’s kinetic Nile Rodgers-esque guitars, and Baird’s hip-swaying bass riffs. Cuts like “Bad Decisions” and “Fever” are catchy, falsetto-heavy groovers that bring to mind a mix of the Bee Gees’ Saturday Night Fever soundtrack and Off the Wall-era Michael Jackson. Similarly, the romantic and sad-eyed “Invincible” sounds amazingly like a Justin Timberlake ballad if produced by ELO’s Jeff Lynne. With Gameshow, Two Door Cinema Club ultimately balance a growing pop maturity with a stylish strut worthy of Saturday Night Fever’s Tony Manero.